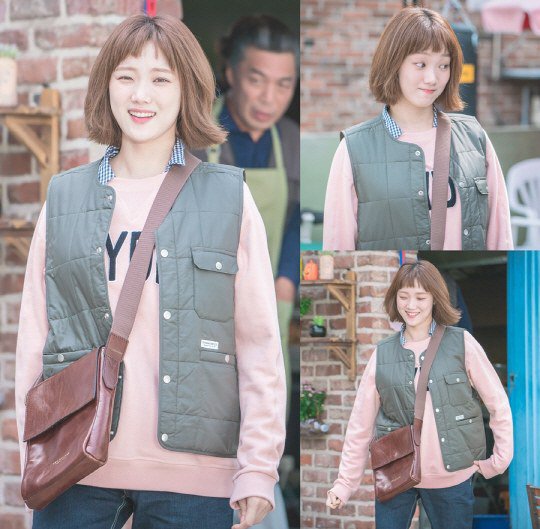 Lee Sung-kyung is starring in the new MBC drama "Weightlifting Fairy Kim Bok-joo" as Kim Bok-joo. This leading role is proof that she's on a roll ever since her debut in 2014.

Lee Sung-kyung has always been in a city-girl but this time she's going through a mass transformation as Kim Bok-joo, a girl from the countryside who knows nothing but weightlifting.

The actress cut her hair short and shaggy to look the part and in the picture, she's smiling cheerfully. She's also added on some weight to look healthier and her 'v-line' is no longer there.

This picture was taken on the 1st during the making of the drama. Lee Sung-kyung arrived early and greeted everyone on the set. She seemed ready to go and she played with the dogs around the set while she was on standby and got used to the environment.

Lee Sung-kyung has been putting a lot of effort into this role as a weightlifter by gaining weight and practicing how to lift. She says Bokjoo is a lovely character.

Meanwhile, "Weightlifting Fairy Kim Bok-joo" is a youthful drama about weightlifter Kim Bok-joo who finds true love. The drama is written by Yang Hee-seung and Kim Soo-jin-III and directed by Oh Hyeon-jong.

The drama will be released in November after "Shopping King Louis".

"Lee Sung-kyung as Kim Bok-joo in "Weightlifting Fairy Kim Bok-joo""
by HanCinema is licensed under a Creative Commons Attribution-Share Alike 3.0 Unported License.
Based on a work from this source