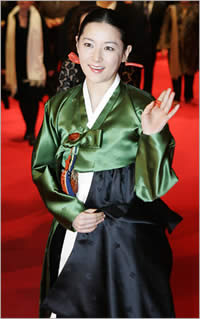 Korea star actress Lee Young-ae has arrived in Berlin, where she is on the jury of this year's Berlin International Film Festival, which started on Thursday. Lee will join other members in deciding who walks away with the Golden Bear in the international competition, where 19 films are in fierce contention for the trophy.

She spoke to the Chosun Ilbo in the German capital about her acting, which has made her a star all over Asia and beyond.

Is acting skill something you are born with?

Clearly actors have to be born with something special. That may be their appearance or nature. But luck can definitely intervene too. Even so, without patience and lots of effort, you won't last long. In my 20s, it was a lot of trial and error, and every time things went wrong, it made me look back and reflect. Acting is not something that anyone can learn if they are instructed by the right person, it must come from a desire deep within yourself.

Is it hard to live according to the image that you show to the world?

Maybe if I packaged myself, it would be difficult to continue this way. But I've never intentionally tried to manufacture an image for myself.

Do you think too much?

I have so many thoughts that I'm trying to get rid of them.

In this business, there is a lot of talk and a lot of trouble. Because of that, you worry more than normal people about how to behave. I don't want to hear that others have found out my flaws.

Do you have to restrain yourself in that way?

It is a duty and a right that comes with the job. And restraint is not necessarily a bad thing. Being an actress may seem attractive because all eyes are on you, but the downside is that you also end up becoming the subject of a lot of ridiculous rumors.

Until just a few days ago, things were going well. Then the story that a company listed on the Kosdaq announced it was going to take you over made headlines.

When I think about the way they did this without my permission and brought my family into it just for their own benefit, I get very angry. And what's worse is that they waited to do it until I was out of the country for the Berlin Film Festival.

What do you usually do to alleviate stress?

I try to shout out the stress, when something gets on my nerves. These days I'm a little bit controlling. When I was shooting "Dae Jang Geum (Jewel in the Palace)" it was so tough that I went to my car and cried by myself. I also cried when I wasn't doing work on the level that I thought I should, on the set of "Sympathy for Lady Vengeance". I worked so hard on my role in "Sympathy", but when I saw criticism that failed to acknowledge that, I was crushed.

Where do you see yourself in 10 years?

Basically, I think I'll have a family by then. But since we never even know what tomorrow will bring, I don't know if I will still be acting that far down the road. But for now, I do love my job.