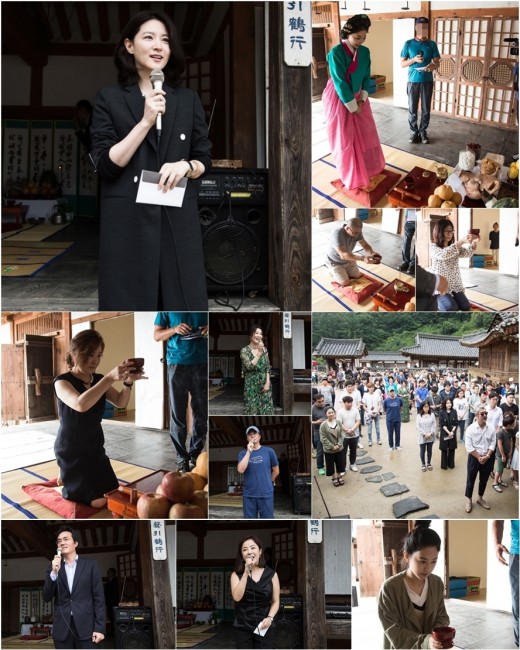 On August 21st, the production company, Group8 has revealed photos to show the scenes from the gosa ritual for the drama, which took place on August 21st.

In the photos, Lee Young-ae looks sincere as well as excited as she is returning to the small screen in 11 years with the drama. Also other actors and staff members could not hide their excited and thrilled feelings as this is a large scale project they get to experience after a while.

As it rained lightly in the morning on this day and the weather cleared up at the time the event was about to begin, people at the event were delighted, saying it was a sign of good luck.

Also Lee Young-ae showed off her acting performances still strong during the test filming and received compliments from the staff members.

'Saimdang: Light's Diary' is a reinterpretation of the life of Shin Saimdang during Joseon era to depict her artistic spirit as a genius painter and her undying love.

Lee Young-ae will play double roles as Saimdang and Seo Ji-yoon, a college lecturer, who majored in Korean art history. She is in the center of the story to solve the interlaced secrets between Saimdang's diary and portrait of a Beauty that she discovered by accident.

'Saimdang: Light's Diary' will be pre-produced by 100% in order to pursue perfection, before it is broadcast by SBS in the second half of this year.