Legendary S. Korean Director of "The Man from Nowhere" Returns with the Highly Anticipated Film "No Tears for the Dead" 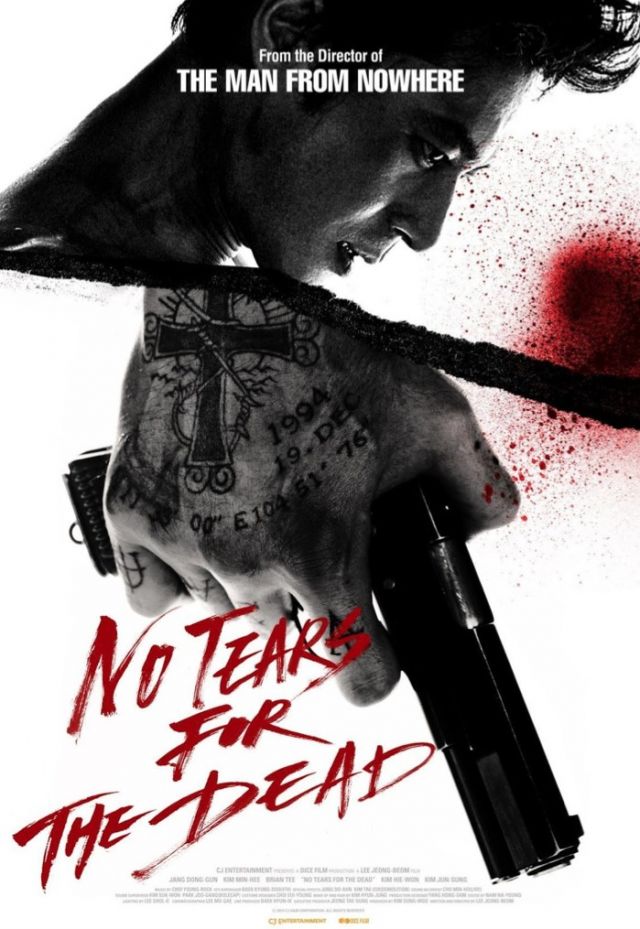 South Korea's highly anticipated film "No Tears for the Dead" (directed by Lee Jeong-beom) is set to be released in North American theaters June 20th!

PROLOGUE
Veteran hitman Gon (Jang Dong-gun) receives a mission, which is to target Mogyeong (Kim Min-hee). The trouble is, he falls in love with her.

SYNOPSIS
Abandoned by his mother shortly after immigrating to America, Gon is raised by the mafia and grows up to become a cold-blooded hitman. Though usually flawless in taking out his targets, Gon makes a terrible mistake of killing an innocent young girl. A flood of guilt takes over his life and the situation becomes worse when his boss assigns him the job of killing the young girl's mother. Gon's new target, Mogyeong, is a risk manager at an investment firm and has buried herself in work to bury her grief. She is completely unaware of her role at the heart of a dangerous conspiracy. Finally, she meets the man who wants to tell her the truth behind the death of her child.

Legendary Director of "The Man From Nowhere" Returns with the Highly Anticipated movie "No Tears for the Dead"
In 2010, director Lee Jeong-beom kicked off a new action era in Korean cinema with "The Man From Nowhere", which became South Korea's highest grossing film in 2010 with over 6.2 million box office admissions.
"The Man From Nowhere" has received positive reviews from English-language critics. As of August 2013, six of six critics gave 'Fresh' reviews, according to Rotten Tomatoes. One of those critics, Russel Edwards of Variety, wrote:
"Brutal violence dominates the dynamic Korean thriller "The Man From Nowhere". Local heartthrob Won Bin ("Mother - 2009", "Taegukgi") transforms himself into an action hero in writer-helmer Lee Jeong-beom's swift and blood-soaked yarn, about a mystery man who gets caught up in a gang war while trying to protect a child, recalling Luc Besson's The Professional".
As such, Lee's follow-up film has been the subject of great interest within the film industry. Lee returns from a four-year hiatus with "No Tears for the Dead" and joins with super star Jang Dong-gun and Kim Min-hee for the most anticipated movie of 2014 in South Korea.

A Collaboration Between Two Actors that Need No Introduction

Jang Dong-gun and Kim Min-hee headline Lee Jeong-beom's latest film, "No Tears for the Dead".
Jang is a true superstar who has captured Asian audiences for years. His ability to exude masculinity in movies such as "My Way", "Typhoon", and "Taegukgi" captured the attention and admiration of viewers. The smooth charm he displayed in the drama "A Gentleman's Dignity' further cemented his position as a leading man to be reckoned with. Lee stated that before he even began producing the film, he always had Jang in mind for the role.

He stated that he "was convinced that Jang Dong-gun could fully express Gon's regret for his profession, and the emotions of a man on the brink". Jang chose "No Tears for the Dead" after his two-year hiatus from the silver screen because of Gon's emotional depth and the demanding physical stunts that the role required. For five months, he trained for four hours a day, four days a week. He even took part in firearms training with a U.S. Special Operations unit. Following the grueling training, Jang expressed that he, "felt very close to the character".

Kim Min-hee, famous for her maturity in each role she plays, is an unforgettable presence as Mo-gyeong in "No Tears for the Dead". In casting the film, Lee knew that he needed a woman who could remind Gon of his mother-a person who he had tried so hard to forget-and he immediately thought back to Kim's role in the film Helpless. He later said that chose Kim for the role because "the ability to act does not come simply from experience but from inner maturity". Kim portrays Mo-gyeong's plight and raw emotions with such a quiet power that viewers will not soon forget this performance.

A New Era of Action and Drama: The Birth of Sentimental Action

Lee Jeong-beom is well-known for sequences juxtaposing intense action with emotional drama. He made an indelible impression on both critics and audiences with "The Man From Nowhere", but he was not content to rest on his laurels. Instead, he chose to go in a new direction with "No Tears for the Dead". He deeply wanted to make a film that could concentrate on the characters' inner lives rather than building emotional drama around action sequences as he had in previous films. To achieve this goal, in "No Tears for the Dead", he poured himself into each phase of production. He was present from the first casting and location scouting to the mise-en-scène of every shot in order to completely and honestly capture the emotions of the characters.

The landscape of Lee's film also plays a huge role in its overall atmosphere. America, where Gon was raised, represents his traumatizing youth and his journey into isolation. It is this landscape where Gon's psyche is projected on locales that feel desolate and isolated-like the Mojave Desert. The raw power of the action scenes also dominates the screen. In "No Tears for the Dead", intense gun battles and explosions, the likes of which haven't been seen in Korean cinema, were staged across city streets in broad daylight. Each landscape and each action sequence display a deeper meaning and an emotional depth.

In order to create these intense action scenes, Lee personally studied the methods of U.S. and Korean Special Forces soldiers and experienced handling firearms at an innumerable number of firing ranges. Not content to simply have gun battles in "No Tears for the Dead", Lee used grenades and gun flashes to add variety, while he used smoke and dust bombs to amplify the intensity of action sequences. "No Tears for the Dead" is the fruit of incredible effort and consideration.

A Cold-Blooded Killer Facing a Dilemma - Gon (Jang Dong-gun)
Abandoned in the middle of a desert as a child, Gon was raised by a mafia syndicate to become a skilled hitman. He was very good at his job. However, the fatal mistake of killing an innocent young girl during one of his missions leaves a permanent scar on Gon. As he prepares to move on from his job, Gon is given a final mission. He travels back to his motherland South Korea to take out his last target. He soon discovers that his last target is the mother of young girl he killed. Gon can neither kill nor spare her.

Jang Dong-gun
South Korea's beloved star, Jang Dong-gun plays Gon, a killer filled with the guilt of killing an innocent child. Jang is best known for his leading roles in the films "Friend" (2001) and "Taegukgi" (2003). He is one of the highest paid actors in Korea, consistently topping surveys by industry insiders of most bankable stars.

A Mother in Despair - Mogyeong (Kim Min-hee)
Mogeyong is a high-flying fund manager. However, she falls to despair when she loses her husband and child. Burdened by the sadness of her daughter's death and her senile mother, Mogyeong turns to alcohol and pills. One day, Mogyeong is approached by a man claiming to know the truth behind her daughter's death.

Kim Min-hee
Buil Film Awards and Baeksang Arts Awards winner Kim Min-hee continues to prove her acting prowess from her leading role in "Helpless" (2012), "Very Ordinary Couple" (2013), and now "No Tears for the Dead". Kim was drawn to Mogyeong's deeply saddened and troubled character. She spent long hours getting into a character who lost her daughter, husband and the will to live. The character's shattered state consistently pushed Kim to her emotional edge.

Capturing human nature in action - Lee Jeong-beom
"I have never been satisfied with an action film that you watch and forget".
Director Lee Jeong-beom created the so-called "The Man From Nowhere" and "Won Bin" syndromes with his second
film "The Man From Nowhere". His unique combination of action and emotional drama drew not only critical acclaim, but also huge audiences. Each new film bears the mark of his signature examination of the relationships between unlikely characters, but in "No Tears for the Dead" he adds another level of intensity and deeper emotion between each of his characters.
"No Tears for the Dead" takes a fresh look at a relationship between a killer and his target, a woman who he has come to love. The film was born from the image of a killer apologizing to his victim, and it was developed, retouched and completed over the course of 10 years. The years of labor and dedication are visible on the screen through each gory action scene bursting with emotion and the gripping dynamic between a killer bearing the weight of a terrible mistake and his next, last, target. Lee said of the film that "it is an action film, but I wanted characters with a palpable humanness. I wanted a movie that can bore into human nature".
The dynamic relationship between two souls on the edge of collapse will captivate viewers from the first moment to the last.

"Legendary S. Korean Director of "The Man from Nowhere" Returns with the Highly Anticipated Film "No Tears for the Dead""
by HanCinema is licensed under a Creative Commons Attribution-Share Alike 3.0 Unported License.
Based on a work from this source