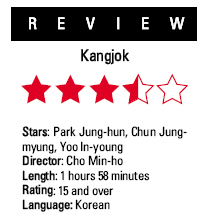 The movie "Les Formidables" (Kangjok) may lack originality, a well-organized plot and a strong message, but it entertains with action-packed scenes well blended with hilarious jokes.

Directed by Jo Min-ho, the film revolves around detective Sung-woo and jailbreaker Su-hyun, who team up to help each other.

Sung-woo (played by Park Joong-hoon) is a corrupt detective who frequents bars, often leaving his partner alone on duty.

One day when busy collecting dirty money from a bar owner, his partner is killed, an event Sung-woo could have stopped if he had been with him.

Meanwhile, Su-hyun (by Chun Jung-myung) begins a new life after breaking away from a criminal gang and begins running a small restaurant with his girlfriend in the hopes of leading an ordinary life.

But one of his best friends from the gang asks him to do a favor, which leads him to be falsely accused of a murdering Sung-woo's partner. The accusation ends in a prison term for Su-hyun.

He escapes from a police hospital where he was sent after intentionally injuring himself.

On the run, Su-hyun encounters Sung-woo and accidentally takes him as a hostage. Their odd partnership begins after Su-hyun promises to give Sung-woo enough money for an operation for Sung-woo's sick son on the condition that Sung-woo helps him flee.

While they save each other from a series of life-threatening crises, they build a mutual understanding and learn that Su-hyun's former gang was involved in the murder.

Such an odd partnership is not original _ we have probably seen the same formula in other movies. But the partnership works well as they produce enjoyable action scenes.

The story has some flaws due to seemingly unrealistic scenes and outcomes. And it's not clear how Su-hyun gets trapped in the murder case to begin with.

But fast camerawork helps the story develop smoothly without long delays while jokes between serious scenes allows the audience to enjoy the film without questioning the reality of it all.

Park and Cheon don't bring anything new to the movie as they portray their typical and familiar images. Park's character in this film is much like the one he plays in the "Two Cops" movie series he filmed in the 1990s, and which earned him huge popularity.

He once again plays a detective who has no strong passion for his job but always tries to craft ways to escape from difficult situations while cracking jokes.

But both actors give performances that maintain interest in the film.

Overall, the movie is enjoyable and, if you're not the horror film type of person, "Les Formidables" can be a good alternative, especially for the action film buffs.

"Less 'Formidable,' But Enjoyable"
by HanCinema is licensed under a Creative Commons Attribution-Share Alike 3.0 Unported License.
Based on a work from this source