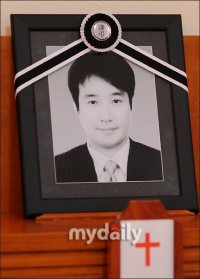 The late Yoo Young-ae, the mother of the late actor Ahn Jae-hwan, who died from liver cancer last week, has been buried beside the grave of her son in Bucheon, Gyeonggi Province.

But the letter Yoo wanted to be handed to Ahn's widow, comedian and radio host Jung Sun-hee was burnt as Jung did not visit Ahn's bereaved family.

Ahn's elder sister, Ahn Kwang-sook, recently said that her mother left a letter for Jung and asked them to hand over the letter if she comes, and if not, cremate it along with her.

As Jung did not appear at the funeral service, Ahn's sister said they had to burn the letter according to her mother's wishes. She said nobody saw the contents of the letter.

Yoo died from liver cancer on March 25, less than two years after her son was found dead after an apparent suicide.

Jung Sun-hee has refused to meet Ahn's family members, who have demanded an explanation of what she knew about the factors behind Ahn's death. It had been rumored that Ahn took his own life after he borrowed a huge sum of money from loan sharks.

Jung Sun-hee, who left her MBC radio show in 1998 when listeners complained about critical remarks she made regarding the protest of U.S. beef imports, has been hosting an SBS radio program since last April.

On Monday, Choi Jin-sil's younger brother, Jin-young, was found dead in what is also seen as an apparent suicide.

"Letter by Late Ahn Jae-hwan's Mother to Jung Sun-hee Burnt"
by HanCinema is licensed under a Creative Commons Attribution-Share Alike 3.0 Unported License.
Based on a work from this source