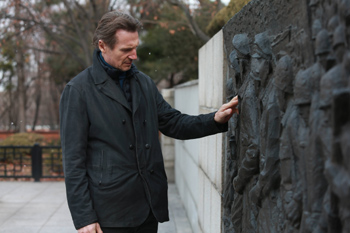 As Hollywood superstar Liam Neeson joined the shooting of the Korean film "Operation Chromite", the code name for the Battle of Incheon, which took place in September 1950, shortly after the Korean War broke out, the movie is drawing keen attention in Korea.

According to Taewon Entertainment, the producer of the movie, the British action star arrived in Korea on Monday and spent a busy day on Thursday, preparing for his role as American General Douglas MacArthur, the war hero who spearheaded the Battle of Incheon.

The film focuses on the hidden stories of eight war heroes assigned to a secret mission called "Special Spy Operation X-Ray", which preceded the surprise attack in Incheon. General Douglas MacArthur, the chief commander of the U.N. forces during the Korean War, appears in several scenes of the scenario. Accordingly, his role is reported to be significant in the film.

On Wednesday, the Hollywood star visited the Freedom Park in Incheon and laid flowers on the statue of General MacArthur. "The visit was his idea. Laying the flowers on the statue was to express his respect for the war hero that he is playing in the movie, said an official from Taewon Entertainment.

Neeson has not fixed his flight schedule to go back, and he is expected to stay in Korea for more than two weeks. Cranked on December 4 last year, the movie is gaining fresh momentum thanks to his participation, with 30 percent of the shoot finished so far. With the production cost hovering 14 billion won (11.53 million U.S. dollars), the movie is expected to be released in July or August this year for the summer season. Actor Lee Jung-jae is playing Jang Hak-su, a navy lieutenant who led Operation X-Ray, and actor Lee Beom-soo is playing Lim Gye-jin, a North Korean tactical officer and the commander of a fortified town in Incheon. "Operation Chromite" is being directed by John H. Lee, who directed "Into the Fire" (2010) and "A Moment to Remember" (2004).