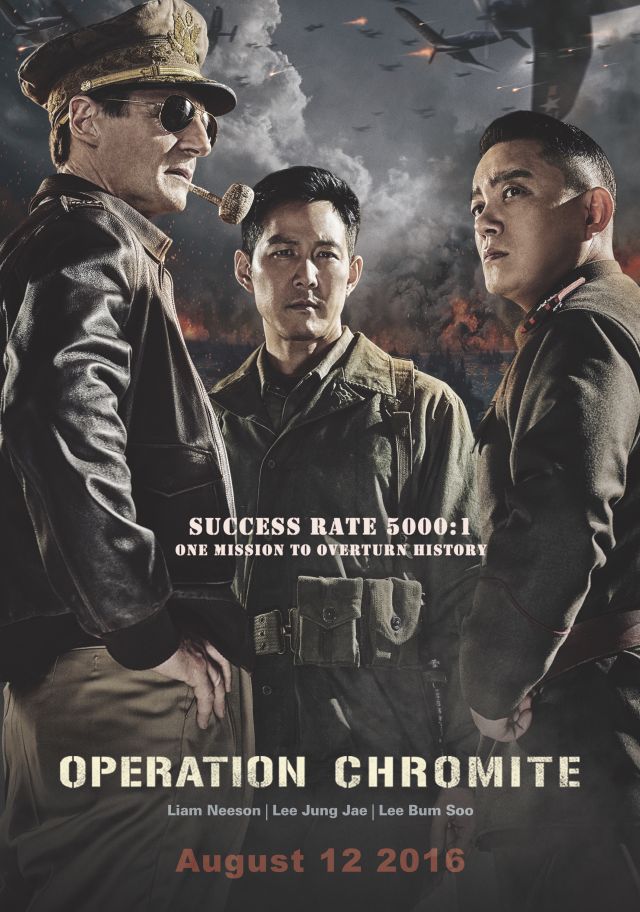 CJ Entertainment will distribute the film "Operation Chromite" in North America on August 12, 2016. From Taewon Entertainment, "Operation Chromite" is poised to be the largest Korean summer blockbuster this year, telling the true story of the heroes whose lives were sacrificed in order to turn the tide of the Korean War. Liam Neeson stars as General MacArthur, who led the attack against the North Koreans in the Battle of Incheon, forcing them to retreat out of Seoul.

"Operation Chromite is already attracting attention in mainstream Hollywood, and is the next great film from John H. Lee", said Angela Killoren, COO, CJ Entertainment. "We are proud to be the company to bring this true, but often over looked story of unsung heroes and the American hero General MacArthur during a time when South Korea and the United States banded together in war against North Korea".

The major attack would not have been successful if it weren't for a group of South Korean Navy Special Forces, led by Captain Jang Hak-soo, and the KLO (Korean Liaison Office) unit. Before the battle, this team is tasked with a covert operation to successfully infiltrate the North Korean army command center. To do so they will need to go undercover, disguising themselves as a North Korean inspection unit. Time is not on their side as the attack will begin with or without the success. To complete their risky mission, the team must make incredible sacrifices to ensure the freedom of South Korea.

"Operation Chromite" is directed by John H. Lee ("The Third Way of Love", "71-Into the Fire", "Sayonara Itsuka" and "A Moment to Remember") and is produced by Jeong Tae-won (the upcoming film "Monstrum", "Triangle - Drama", "71-Into the Fire" and "IRIS"). In addition to Liam Neeson, "Operation Chromite" also stars Lee Jung-jae as South Korean Captain Jang Hak-soo ("The Assassination", "The New World", "The Thieves" and "The Housemaid - 2010"), Lee Beom-soo as North Korean Commander Lim Gye-Jin ("The Divine Move", "IRIS 2" and "The City of Violence"), and Jin Se-yeon as Han Chae-seon ("Enemies In-Law" and "Doctor Stranger").