"Life Bar" Park Joon-geum's On Screen Sons Are All Stars 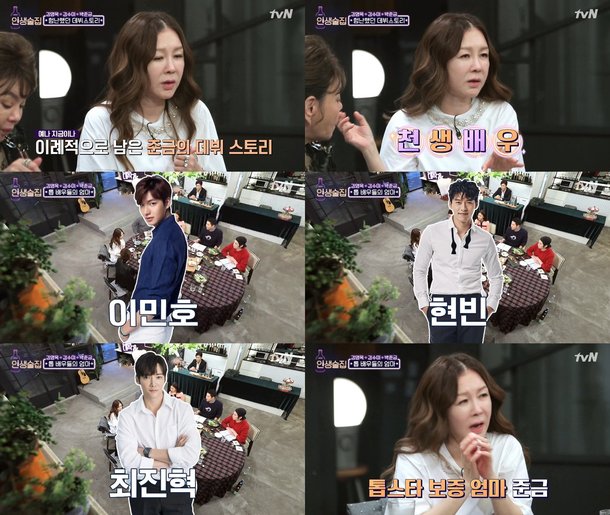 Park Joon-geum mentioned the actors who played her sons on screen on the latest episode of the tvN TV show "Life Bar" that featured her, Kim Soo-mi, and Kim Young-ok.

Park Joon-geum talked about her debut and said, "One reporter said I was an actress who'd made it through a gate that's more difficult than a camel trying to go through a needle hole. I guess it was fate now that I see it".

Actors Hyun Bin, Choi Jin-hyuk, and Lee Min-ho who played her sons in dramas all became top stars. Park Joon-geum said, "I was lucky, but you have to go through me to become a star".

"While I was in "The Gentlemen of Wolgyesu Tailor Shop", Kim Soo-mi said she'd monitor me and to keep that promise, she downloaded the drama in Japan. I was so grateful".

Kim Young-ok said, "It's nice to have close friends to talk to" and Kim Soo-mi said, "There's not a lot of people we can pour our hearts out to".

"Life Bar" is a talk show where guests and the panel drink and talk. The show is hosted by Shin Dong-yup, Kim Hee-chul, Kim Joon-hyun, and Han Hye-jin.

""Life Bar" Park Joon-geum's On Screen Sons Are All Stars"
by HanCinema is licensed under a Creative Commons Attribution-Share Alike 3.0 Unported License.
Based on a work from this source