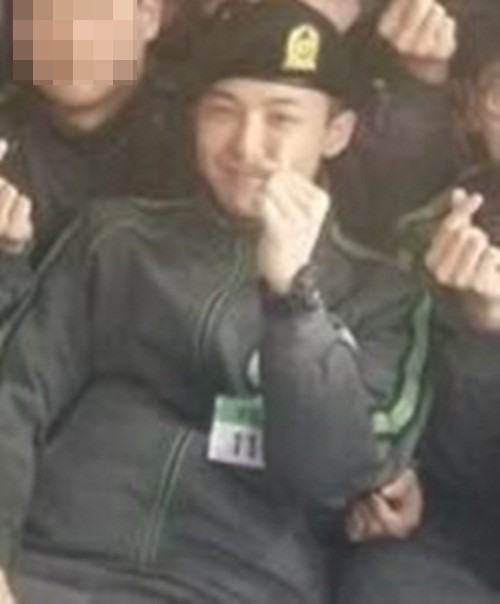 A picture of BIGBANG's leader, G-Dragon, in the military was released online.

On March 11th, a picture of G-Dragon was uploaded on an online community. As G-Dragon enlisted on February 27th, the fans were proud of him, yet concerned at the same time since it is difficult to hear about daily life and well-being while he is serving his two years of mandatory military service.

However, in the picture released, G-Dragon seems to be doing well while being surrounded by his fellow soldiers. G-Dragon still has that charm even in a casual sweatshirt and pants, as he sends his love towards the fans with the finger hearts and adorable smile. G-Dragon will be serving the country until November 26th 2019, and the dates seems like forever away to all the fans.

Meanwhile, G-Dragon's agency, YG Entertainment released an official statement, politely asking the fans to please restrain from sending further fan-mails as the military's recruits education base email account and the website keeps on crashing due to all the email being sent to G-Dragon.

"[Lily's Take] G-Dragon Settles in Nicely Along With his Fellow Soldiers"
by HanCinema is licensed under a Creative Commons Attribution-Share Alike 3.0 Unported License.
Based on a work from this source