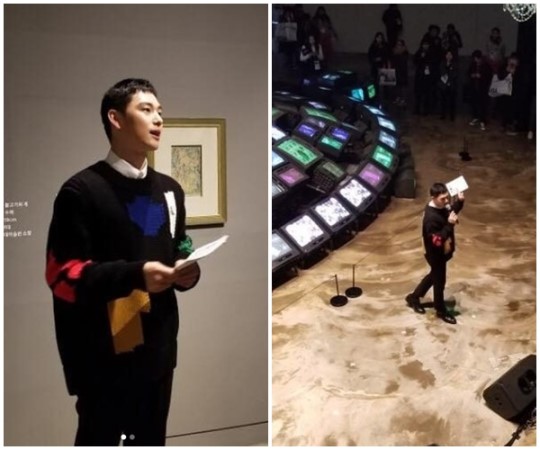 Actor Im Si-wan took a break from his daily military duty as he put down the solider uniform and changed into a dandy docent, or guide, outfit.

On February 22nd, PyeongChang Olympic Association posted a picture of Im Si-wan on their official Instagram account. In the picture, Im Si-wan is captured, giving a tour of PyeongChang Olympics Plaza Cultural Exhibition. Both he and Ok Taecyeon are assigned to be the docents of this exhibit, helping the visitors as the guides.

The post has a caption saying, "At Culture ICT Pavilion inside the PyeongChang Olympic Plaza, we will have a very special #docent on 22, 23, and 24 February! Our docents will help you understand the meaning of the artwork there. #OkTaekyeon on the 22nd and 23rd & #ImSiwan on the 24th at 1pm and 3pm".

The fans were delighted to see Im Si-wan during this special outing for him.

"[Lily's Take] Im Si-wan Sighted as a Docent for PyeongChang Olympics"
by HanCinema is licensed under a Creative Commons Attribution-Share Alike 3.0 Unported License.
Based on a work from this source