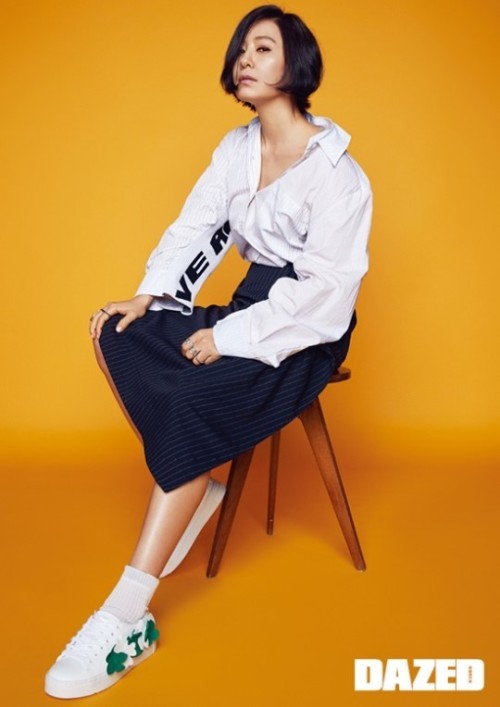 Actress Kim Hee-ae shared her first impression on the movie "The Vanished" in an interview.

Recently, Korea's fashion and culture magazine Dazed & Confused shared the photos from Kim Hee-ae's photoshoot and her interview with the magazine. In the photos, Kim Hee-ae is seen in many different casual, yet stylish looks. Matched with her chic short haircut, she wore dresses with unique silhouette and volume. From feminine look to sporty, Kim Hee-ae can pull off any look.

Since 1983, this veteran actress has been working diligently on her acting. When she was asked about how 2018 is shaping up for her, she simply answered, "It's not like anything's different because it's a new year. I'm always trying to learn something new. I just can't stay still". She continued, "After I learn and exercise, I can lay on the bed at night and say 'Ah, I've done all I can', and have a good night sleep".

Regarding the upcoming mystery/thriller movie "The Vanished", she expressed her satisfaction saying how fun it was to film. She added, "I read the whole script [of "The Vanished"] in one sitting, which is rare. I do have standard of my own when it comes to selecting a new drama or a new movie, but since I don't always receive outstanding pieces, I often make a decision to appear in a show based on if it's worth it".

"[Lily's Take] Kim Hee-ae Read Through "The Vanished" Script in One Sitting"
by HanCinema is licensed under a Creative Commons Attribution-Share Alike 3.0 Unported License.
Based on a work from this source