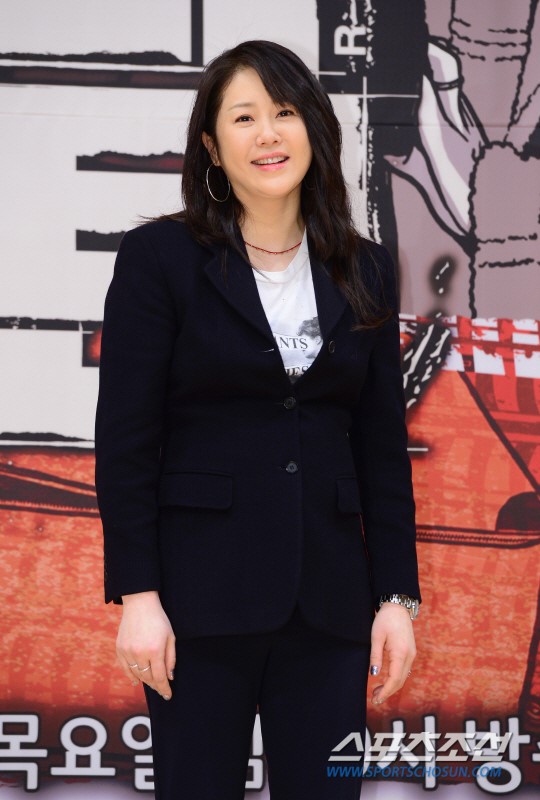 Along the news about Go Hyun-jung leaving the drama "Return", there has been active arguments from those who claim to have witnessed Go Hyun-jung creating conflict with the production team of dramas and variety shows.

According to an anonymous producer, a large indicent happened in the past involving Go Hyun-jung. The PD said, "Back in 2010, Go Hyun-jung had a big fight with the staff of the drama "Daemul - Big Thing". The director of the drama pointed out the tone of her acting and wanted to re-shoot the scene. Go Hyun-jung just headed back to her van. When the chief producer followed to convince her to come back, the van started moving abruptly with the chief producer still holding onto the door he was about to open. He was dragged by the van for few meters out and even though he was put in danger, he had to beg the actress to come back to the set".

Regarding this statement, the chief producer denied the incident saying, "It is not true. We just didn't have a good place to discuss the problem so we talked in the van".

One of the staff members who participated in the making of the talk show "Go Show" under actress Go Hyun-jung's name, spoke up. "Go Hyun-jung spoke so rudely to the director and scriptwriters of the show when there were conflicts in the middle of the show. Once, she threw an ashtray at them, calling them names. There was a time where a miscommunication happened because her manager did not properly inform her of the extended filming time and even though the staff apologized to her, she yelled at them in front of the audience".

An alleged conflict on the set of "Queen Seon-deok" was also mentioned among the testimonials. According to a staff member from the drama, Go Hyun-jung demanded numerous improvements on the set to the staff such as cleaning the toilets, getting food, water, pest control, and more. The staff were exhausted by her demands. The director sarcastically said, "The days Go Hyun-jung comes down to the set is the days we have to clean".

Some producers and directors share accusations, but netizens are not buying into the rumors and statements they hear. Since Go Hyun-jung's leave was announced, multiple news articles have been released, attacking the actress and netizens are crying media powerplay.

Each accusational news article is receiving, on average, 2,000 comments from furious viewers saying this whole incident is a witch-hunt. Reason being, many of the testimonials are being kept anonymous and toxic rumor-based, not facts.

Plus, actress Go Hyun-jung is known for her big heart when it comes to the younger staff members and her junior actors and actresses. She has bought many meals and gifts for them to use on the set, which she paid for out of her pocket.

One netizen shared a comment which reads, "That accusation on "Queen Seon-deok" set is just ridiculous. We all know that the hygienic condition of the set was unbearable. All the actors and actress caught flu, and Lee Yo-won even caught shingles from filming there. The production team didn't even feed everyone properly, giving excuses that the budget was low. Go Hyun-jung was the one who took the charge and requested the improvement on the set on behalf of everyone. She even brought a food truck to feed them, making sure everyone was okay. Now you are twisting everything and putting the blame on her?" This comment received over 7,000 likes on it and many people continued commenting their agreements to the post.

SBS station is currently under fire from the raging audience after Go Hyun-jung's agency released the statement which reads, "We accept the notification from SBS on actress Go Hyun-jung's leave". From the statement, netizens are assuming that Go Hyun-jung was kicked out from the drama rather than leaving on her own will.

Since the news was released, there are over 800 posts on the official website of "Return", all the netizens accusing SBS and the director. The netizens are wanting Go Hyun-jung to return to the drama.

On the rumor of Go Hyun-jung's violent behavior to the staff, her agency argued that she did not hit anyone and that it is a false accusation. According to the news, there were about 7 people present at the scene and SBS has already confirmed the testimonials. An associate from SBS spoke, "We thought everything ended okay, but the aftermath is hitting very hard. We are not sure if we should reveal the truth of this incident or not. It is just not a good sight for the whole station to speak badly of an actress".

We may not know what was really happening on the set, but one thing for sure is that the audience is on Go Hyun-jung's side. The netizens are all gathering together to defend the actress and it is one of the proof that Go Hyun-jung has the undeniable integrity and character.