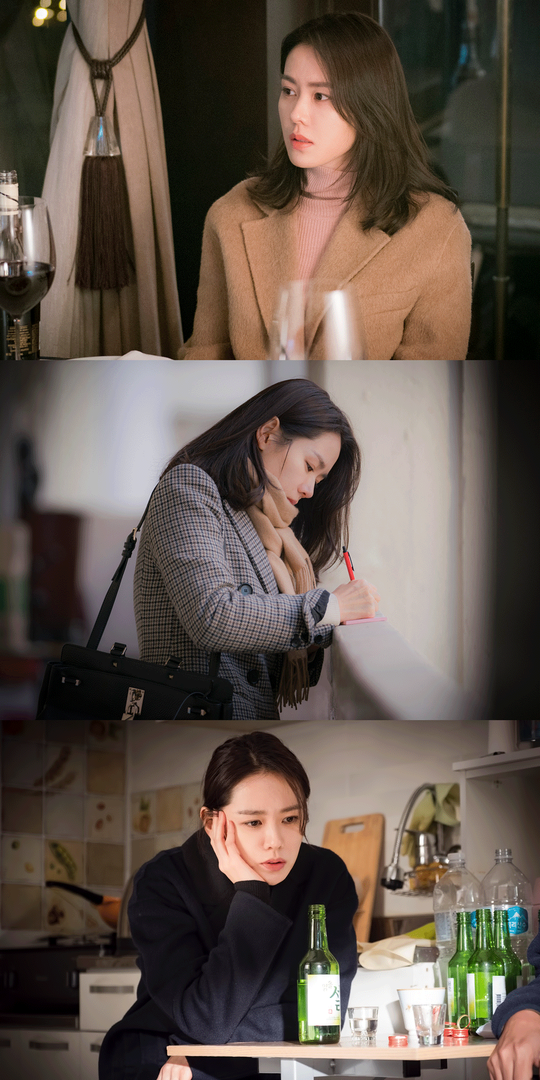 Upcoming drama "Pretty Sister Who Buys Me Food" revealed few still cuts of actress Son Ye-jin in the drama. In the still cuts, Son Ye-jin's character, Yoon Jin-ah, was seen in all parts of her life: doing business as well as her lonely personal life where she comes home from work and stare at the empty bottles of liquor.

Yoon Jin-ah is a typical South Korean woman in her 30s who feels emptiness in her heart because she doesn't feel accomplished in either career or love. Her mediocre life with repeated tasks and schedule starts to change once her relationship with a friend's younger brother, Seo Joon-hee (Jung Hae-in), appears.

The still cuts released are a series of ordinary pictures of someone's day, but if there's something extraordinary about it, it's the beauty of actress Son Ye-jin. Her beauty truly is timeless, as she looks exactly the same as she did when she debuted 18 years ago. She is the definition of a pretty sister all men dream of, and she is ready to greet the fans with her new character as she said that Yoon Jin-ah is a hardworking woman that every woman around her age can empathize with.

A staff member of "Pretty Sister Who Buys Me Food" shared, "Son Ye-jin is showing so much motivation and effort as she is always holding onto her script and having numerous discussions with the director on expressing her character more fully. She is doing a great job in portraying Jin-ah's change of emotion with her detailed acting and really becoming the character. Everyone should be expecting great things to come out of this drama and please support us and Son Ye-jin till the end".

"[Lily's Take] Son Ye-jin's Still Cuts in "Pretty Sister Who Buys Me Food""
by HanCinema is licensed under a Creative Commons Attribution-Share Alike 3.0 Unported License.
Based on a work from this source