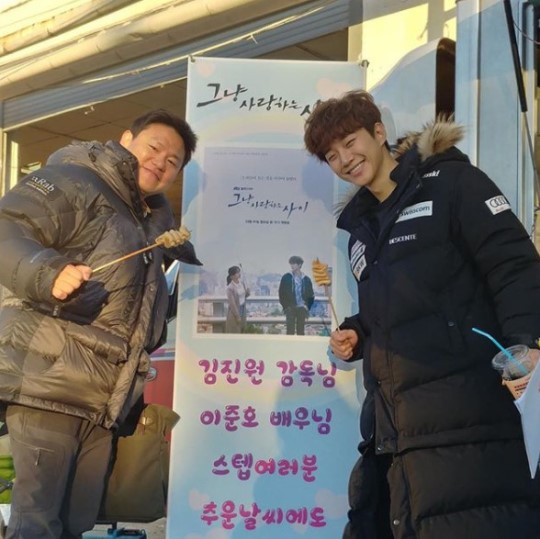 On the 26th, Lee Junho posted a photo on his official Instagram with a caption saying, "Surprise event by dear Joong-ki bro – thank you so much. It was so good. Both me and director Kim Jin-won-I were overjoyed in the morning".

In the photo, Lee Junho, with a drink in his hand, and director Kim Jin-won-I of "Just Between Lovers", are smiling brightly Lee Junho is flashing his signature charming eye-smile.

"Just Between Lovers" staffs revealed this thoughtful gift first on the news, however, without revealing the sender. Song Joong-ki write his name on the banner or let anyone know the snack truck was from him save for the initial contact with the "Just Between Lovers" staff who brought the truck on set. Song Joong-ki's thoughtful gesture was later revealed by the staff.

At this news, many netizens are praising Song Joong-ki for his sweet action and surprised by the unexpected friendship Soong Joong-ki and Lee Junho seems to have.

"[Lily's Take] Song Joong-ki and Lee Junho's Unexpected Friendship"
by HanCinema is licensed under a Creative Commons Attribution-Share Alike 3.0 Unported License.
Based on a work from this source