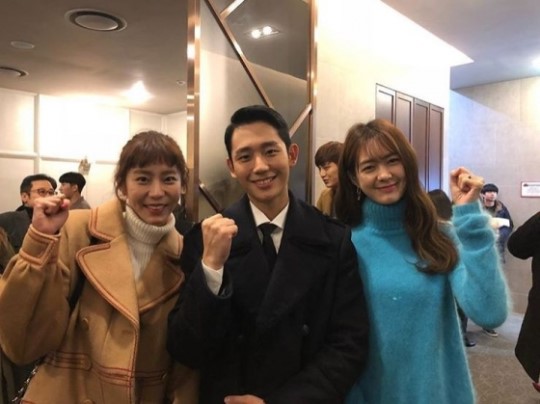 In support of Jung Hae-in, Lee Yo-won posted a photo with a caption that reads, "Go get it, our Tak! Ho-jung is late even though she"s the youngest. We are the flowers, so we didn"t bring any bouquet. "Night Light" loyal family!"

In the picture, Lee Yo-won, UEE, and Jung Hae-in"s smile cheerfully at the camera with their fist up in the "fighting/cheering" pose. According to Lee Yo-won"s caption, actress Lee Ho-jung, who was also a part of the "Night Light" cast, was planning to attend the event, though she is not captured in the photo as she had not yet arrived.

"[Lily's Take] The cast of "Night Light" re-united"
by HanCinema is licensed under a Creative Commons Attribution-Share Alike 3.0 Unported License.
Based on a work from this source