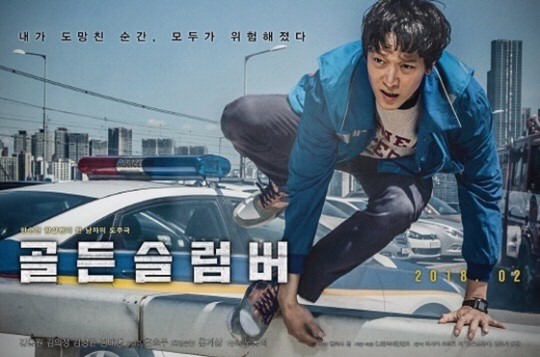 Actor Yoon Kye-sang told fans that "Golden Slumber" will hit the theaters with a huge splash.

On February 1st, Yoon Kye-sang uploaded the poster of the upcoming movie "Golden Slumber" with a caption saying,

"This remind me of last year when we started filming the movie. Even though I didn't have a big part, all the staff members and the director were so nice to me and I was so grateful for everyone. My hair was such a problem. You did a great job, make-up team. I can guarantee that this movie will hit the box office big time!"

"Golden Slumber" is about a man named Geon-woo who goes on the run from the government when he becomes a suspect in the President's assassination. Geon-woo is played by actor Gang Dong-won.

Yoon Kye-sang makes a special appearance in the movie as Moo-yeol, a special agent who is also Geon-woo's classmate from high school. Though his appearance is short, he is expected to be a scene-stealer.

"Golden Slumber" will be released in the theaters on February 14th.

"[Lily's Take] Yoon Kye-sang Encourages Everyone to Watch "Golden Slumber""
by HanCinema is licensed under a Creative Commons Attribution-Share Alike 3.0 Unported License.
Based on a work from this source