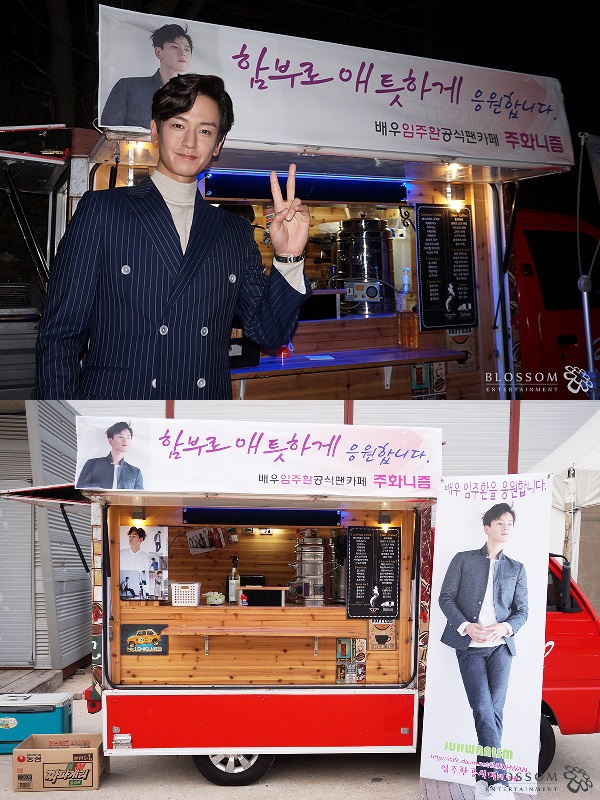 Lim Ju-hwan's fans showed off their support for him by sending coffee truck service to the filming set of "Uncontrollably Fond".

Lim Ju-hwan's official online fan café 'Joohwanism' sent a catering service including coffee and snacks to the filming set of "Uncontrollably Fond" set up in Namyangjoo city in Gyeonggi province.

Lim Ju-hwan took a selfie in front of the placard saying 'We cheer for Untrollably Fond' to respond to the love from his fans. The surprise gift from his fans brought heartwarming energy to the cast and the staff of the forthcoming drama.

Lim Ju-hwan will play Choi Ji-tae, a headquarter manager of a planning department for a large corporation. His character is a perfect guy, good looking, modest and extremely capable. He will stand on the opposite side from the superstar Sin Joon-yeong played by Kim Woo-bin. Suzy will play a documentary producer, who is supported by Lim Ju-hwan's character.

"Lim Ju-hwan's fans present coffee truck service to the 'Uncontrollably Fond' filming set"
by HanCinema is licensed under a Creative Commons Attribution-Share Alike 3.0 Unported License.
Based on a work from this source