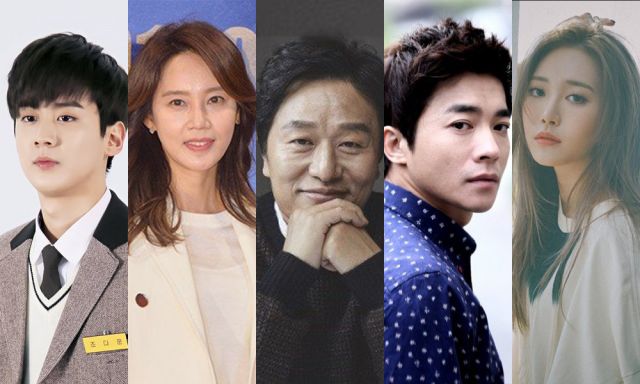 There are quite a few tidbits today with adventuresome idols venturing into drama, veteran actresses taking on parental roles, and a theater man taking on the camera.

1) Film and theater actor Kim Young-min is joining the cast of "My Mister" as a school junior of Lee Sun-kyun's character and who is now the CEO of their company. Not much else is known, but between being younger than our leading man and also being higher in status, I'm taking a guess that Lee Sun-kyun's character isn't quite happy with his position in life.

2) Currently airing "Untouchable" has casted Kim Min-sang as the head of the Bucheon police station, No Ji-hwan. No is a powerful man who will join hands with Kim Sung-kyun's character. Whether he is a full-on baddy we don't yet know.

3) Oh Hyun-kyung will appear in "Radio Romance" as Nam Joo-ha, the mother of Yoon Doo-joon who plays a man who can't work without. This tells me he is probably a rigid, well-off, alpha male character of your ordinary drama variety, but that he may just learn to improvise an be flexible over the course of the drama.

4) TEEN TOP's Chunji is venturing into his first drama with "539 Yeonnam-dong" as Jo Da-woon, a kind high school student who keeps his distance. The highschool student is a very safe role for idols, but that doesn't mean there won't be a challenge or that the role won't be enjoyable.

5) Girl's Days' Yura is joining "Radio Romance" as Jin Tae-ri, a top star who is on the decline because of an accident. I assume she'll be a colleague of Yoon Doo-joon's.

And that's all she wrote for today, folks! Until next time~