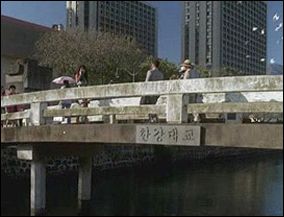 A rather poor substitute for Korea's historic Hangang Grand Bridge shown in the American television series "Lost" has provoked intense feelings among some Korean watchers.

In the 18th episode of the third season of "Lost" which aired a week ago, a bridge labeled as the Hangang Grand Bridge appears briefly in the background of one scene.

The story involved the character Sun, played by Korean actress Kim Yunjin, and showed flashbacks of her life in Seoul.

While the show's creators managed to get the Korean lettering on the bridge right, their version of the structure looked to be in very poor condition and was very much unlike the real bridge in Seoul.

The location where the scene was shot is not known, but many viewers said it appeared to be a Southeast Asian country.

Some Koreans discussing the episode on Internet message boards called the production sloppy and criticized the show makers for their apparent ignorance of Korea.

"It was so absurd I couldn't even laugh", wrote somebody called "ion***" on the Naver portal. "How could they film a scene like that? What does the U.S. think of Korea?"

Another poster wrote, "The producers of Lost have gone too far. They don't have to know everything about Korea, but this is ridiculous".

A few cooler heads maintained that people shouldn't get too upset about a depiction of a bridge in a TV show.

The ABC-produced drama features Kim Yunjin as a young Korean housewife who comes into conflict with her criminal father. Korean Daniel Dae Kim plays her husband.