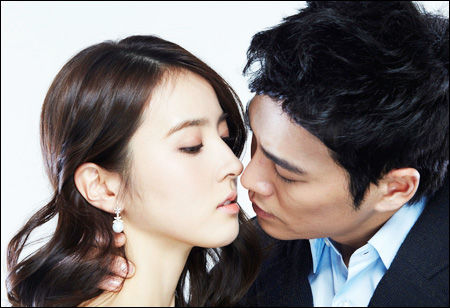 Actors Han Hye-jin, left, and Joo Sang-wook will play lead roles in "The Thorn Birds", which premieres Wednesday on KBS2. / Courtesy of KBS

A new melodrama will uncover family secrets of birth and maternal love on the small screen.

"The Thorn Birds", set to premiere Wednesday on KBS2, includes all the characteristics of a conventional Korean melodrama - a love triangle intertwined with secrets regarding one's birth. The two women in the drama make opposing decisions about family and their fates get tangled up.

Director Kim Jong-chang explained that the story revolves around people who make mistakes and go through the process of forgiviness at a press conference, Wednesday.

"We aim to make a show portraying maternal love, morality and the people in search of such", Kim said.

Kim has directed hit programs including "Yellow Handkerchief" (2003) and "My Rosy Life" (2005), which were mostly straightforward and melodramatic.

Han Hye-jin, the heroine of "Jumong" (2006) and "Jejoongwon" (2010), returns to the small screen by playing the role of Jeong-eun. Jeong-eun is an obscure actress desperately trying to find her biological mother. In her attempt to have a family, she decides to pretend to be the daughter of Myeong-ja, a retired actress who is actually the mother of her friend Yoo-gyeong.

"Jeong-eun is the most naive, with the best intentions among the characters I have played so far", Han said.

As an actress playing the role of an actress, Han said it is a blessed occupation, but she has to endure many things. "I want to live a positive life without distressing myself. I think an easy and composed attitude is needed to be an enduring actor", she said. 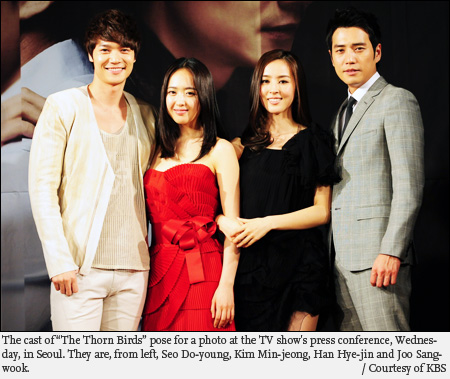 Actress Kim Min-jung plays the femme fatale movie director Yoo-gyeong. She was injured while filming the 2009 drama Strike Love" and had to take break for about a year and half.

"Though Yoo-gyeong is dark, sad and even unsociable, she has her own ambition of becoming a movie director and I feel some affection for the character", Kim said.

Joo Sang-wook performs the role of Yeong-jo, an heir of a conglomerate who gives up on the family inheritance and starts a clothing business and takes care of Jeong-eun. After shooting to stardom as the gentle character in the 2010 drama "Giant", Joo said this drama will be different.

"I have played similar gentle, mellow characters in recent dramas, but Yeong-jo is different. I will break the mold within me", he said.

Veteran actress Cha Hwa-yeon joins the drama in the role of Myeong-ja. Once an iconic actress of the era rumors of adultery force her to stop acting. She accepts Jeong-eun as her daughter, but feels guilty to her biological daughter Yoo-gyeong.

The drama also aims to energize hallyu, the Korean wave, once again.

Oh Sung-min, president of GnG Production, said "The Thorn Birds" is a melodramatic story, similar to hit hallyu dramas such as "Winter Sonata". "We will lead the new Korean wave with 'The Thorn Birds', and revive the boom of Korean drama overseas", he said.

In anticipation, Al Jazeera, the Arabic-language news network, interviewed Han earlier this month. As the drama "Jumong", starring Han as the female protagonist Soseono, is popular in the Middle East, the all news network came to meet Han and cover her new drama.