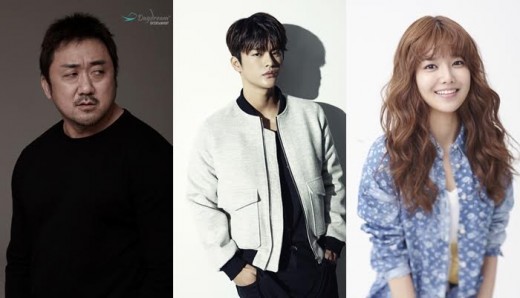 As Taxpayers' Day was celebrated on March 3rd in Korea, OCN's new weekend drama, 'Squad 38' to begin in June this year attracted attention from the drama fans.

OCN will present 'Squad 38' this June. The production team, who presented the drug drama, "Bad Guys", 2014 and showed off their own devoted fan base, is working together to deliver this new drama. "Bad Guys" received good reviews for its dense structure, suspenseful tension, and fantastic cinematography at the level of movie and the writer Han Jeong-hoon is in charge of this anticipated new drama again.

'Squad 38', a refreshing drama to premier this summer deals with such gratifying story in which a revenue officer and an unbelievable fraudster work together to collect unpaid taxes from the malicious tax delinquents, who accumulate wealth by exploiting the legal loopholes and habitually committing tax evasion.

The title 'Squad 38' is derived from the article 38 of the Constitution defining the tax payer's responsibility. The charming fraudster Yang Jeong-do and the chief officer of the revenue collection unit, Baek Seong-il, who shows off his spotless integrity as an officer plot a highly elaborate fraud together to collect all the accumulated unpaid taxes from high income tax delinquents.

OCN revealed their lineup on Taxpayers' Day March 3rd. The irreplaceable leading actor Ma Dong-seok and the versatile actor Seo In-guk, who is going to steal lady drama viewers' hearts have been confirmed. The idol turned actress with the proven acting skills, Girls' Generation Choi Soo-young also has been confirmed as the leading actress for the cast.

"Ma Dong-seok, Seo In-guk and Choi Soo-young confirmed for 'Squad 38'"
by HanCinema is licensed under a Creative Commons Attribution-Share Alike 3.0 Unported License.
Based on a work from this source