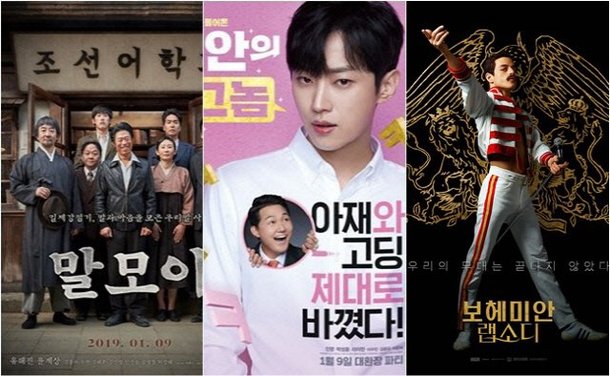 The movie "MAL-MO-E: The Secret Mission" and "The Dude in Me" is currently in 1st and 2nd place of the Box Office while "Bohemian Rhapsody" reversed back to 6th.

According to the Korean Films Commission, "MAL-MO-E: The Secret Mission" came in 1st of the Box Office with a record of 82,083 viewers on the 21st and an accumulated viewership of 2,306,993.

"MAL-MO-E: The Secret Mission" is the first movie by Eom Yoo-na who wrote "A Taxi Driver". During the colonial rule era, a man gets a job running errands at the Korean Language Society despite being illiterate. After learning to read and write hangeul by chance, he sees the dedication and passion of the members of the society in writing Korean-language manuscripts. The movie stars Yoo Hae-jin and Yoon Kye-sang.

Meanwhile, "Bohemian Rhapsody" which went down to 9th place reversed and came back up to 6th place. On the 20th, it drew in 7,429 viewers and has accumulated 9,874,091 total. "Bohemian Rhapsody" has never left the top 5 before the 16th, but with new films popping out, it is now in the lower ranks.

""MAL-MO-E: The Secret Mission", "The Dude in Me" in 1st and 2nd Place for 13 Days"
by HanCinema is licensed under a Creative Commons Attribution-Share Alike 3.0 Unported License.
Based on a work from this source