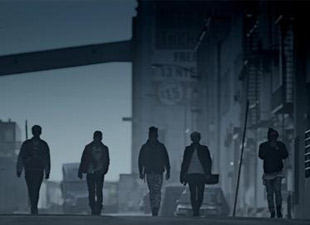 For those sick of seeing just girl groups dominating the k-pop charts, look forward to March!

A number of already established not to mention up-and-coming groups will be making their long-awaited comebacks in the coming month.

It's no understatement to say that one of the biggest comebacks is that of Big Bang. The group has already been releasing a couple of songs off of their upcoming new mini-album. The song "Blue" has already seen explosive success on the music charts. The entire package of the album is slated for a February 29th release, when the group will be promoting all six tracks as title songs. Concerts are also scheduled to start on March 2nd and the group has already been busy making appearances on many popular variety TV programs.

Following the top idol group in dance and hip hop tracks will be the nation's balladeer group, 2AM. This is the first comeback in a year and half since 2AM has met with their fans through the songs "You Wouldn't Answer My Calls" and "Like Crazy" in 2010.

And when talking about male idol groups, who can leave out the longest-running idol group in k-pop, SHINHWA. Their comeback has been years in the making with the release of their final member from the military. The group will kickstart even an Asian tour in Seoul on March 24-25th. In fact, all 20,000 seats have been sold out for the Korea show. The 14-year-old group has fans highly anticipating the month of March for SHINHWA's return.

Other groups to look out for are SHINee and CNBLUE. Both groups have been busy with overseas promotions, but March will see them come back and cater to their Korean fans. Rather than a real comeback for SHINee, there will be members tackling on TV roles. Choi Minho will be acting in "Salamander Guru and the Gang", while Taemin has been cast in the survival show "Immortal Song 2". Key will try his hand out on musicals, more specifically "Catch Me If You Can".

CNBLUE on the other hand have been promoting in Japan, but they are working on their album for a March domestic comeback. Worst case scenario, would be a comeback slightly postponed until April, because of a concert scheduled for Los Angeles with FT Island on March 9th.

One of the hottest groups to look out for these days is Infinite. The guys are also planning to get their piece of the limelight in March with a comeback. After seeing success in Japan with their concerts there, the members will prepare to meet with their Korean fans with the ushering of Spring.

"Male Idol Group Comebacks Galore For March"
by HanCinema is licensed under a Creative Commons Attribution-Share Alike 3.0 Unported License.
Based on a work from this source