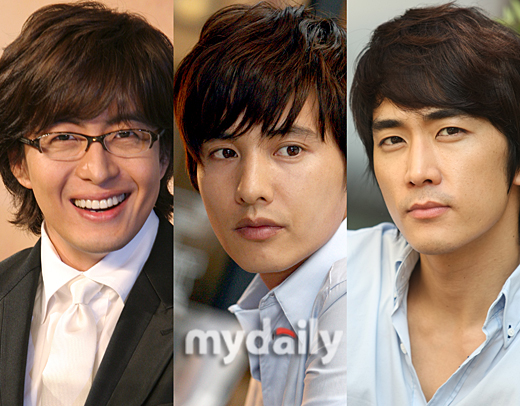 From 'Autumn in my Heart' to "Winter Sonata" and 'Summer Scent', the 'Season Series' by producer, Yoon Seok-ho, the male leads of the dramas have found their loving partners in real life recently in a row.

Bae Yong-joon, who had ignited the Hallyu trend with his role, Kang Joon-sang in "Winter Sonata", became a husband for a woman from everybody's lover, when he tied the knot with actress Park Soo-jin, 30, through a private wedding in a high end hotel last month.

Although it was a private wedding, about 100 Japanese fans visited the venue to congratulate the couple, which proved his undying popularity.

Han Tae-seok of 'Autumn in my Heart', actor Won Bin also had a nuptial ceremony with actress Lee Na-young, 36, in May and made himself unavailable in the market.

While Won Bin is famous for his charismatic line, 'How much will do?' in 'Autumn in my Heart', he opted to hold a quiet private ceremony for his wedding inviting only family members in Jeonseon, Gangwon-do. The couple's delightful pregnancy news also received many congratulations from his fans.

Song Seung-heon, Yoon Joon-seo in 'Autumn in my Heart' also has found his lover finally. The love across border between him and actress Liu Yifei, who is called goddess of mainland, is a great surprise for many people.

The two met through movie "The Third Way of Love", which is to be released soon, and came into the romantic relationship. According to his agency, "The relationship is in a stage that just has begun".

"Male lead actors of 'Season Series': Bae Yong-joon, Won Bin, Song Seung-heon have found true love in real life"
by HanCinema is licensed under a Creative Commons Attribution-Share Alike 3.0 Unported License.
Based on a work from this source