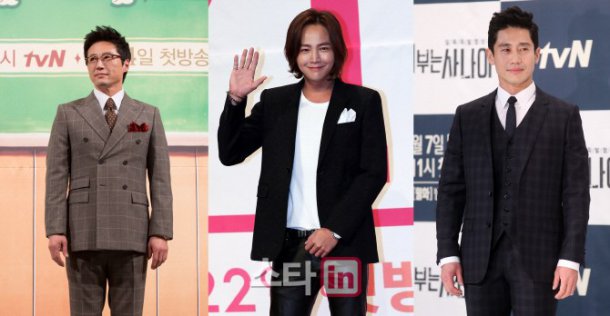 There's going to be a battle between broadcasting stations ground-wave and cable. Actors are going to be responsible for the four dramas. Unfortunately, actresses have been pushed out of the Monday and Tuesday game.

- The fun of choosing actors

Park Shin-yang, Kang Ji-hwan, Jang Keun-suk, Yeo Jin-goo and Shin Ha-kyun hold the key to Monday and Tuesday dramas. They have modifiers called, 'the gods of acting'. Park Shin-yang takes on the role of Jo Deul-ho, a freak lawyer in the KBS 2TV drama "Neighborhood Lawyer Jo Deul-ho". Shin Ha-kyun takes on the role of Joo Seong-chan, a genius negotiator. The two are very anticipated actors.

Kang Ji-hwan, who is starring in the upcoming MBC drama "Monster - 2016", has had some success in the past especially in "Incarnation of Money" written by Jang Yeong-cheol and Jung Kyung-soon. Kang Ji-hwan plays Kang Ki-tan, a character who lost his parents at a young age and lose everything to his uncle Byeon Il-jae (Jung Bo-suk) and seeks revenge.

- Actresses, slowing down on Monday and Tuesday

Actresses won't be as strong this time. The four dramas revolve mostly on the actors and not the actresses. This is the difference between Wednesday and Thursday dramas and weekend dramas. Actresses take up more space in romantic Wednesday and Thursday dramas or weekend dramas. Jeon In-hwa played a big part in "My Daughter, Geum Sa-Wol" and Kim Hyun-joo in "I Have a Lover".

"Male star battle"
by HanCinema is licensed under a Creative Commons Attribution-Share Alike 3.0 Unported License.
Based on a work from this source