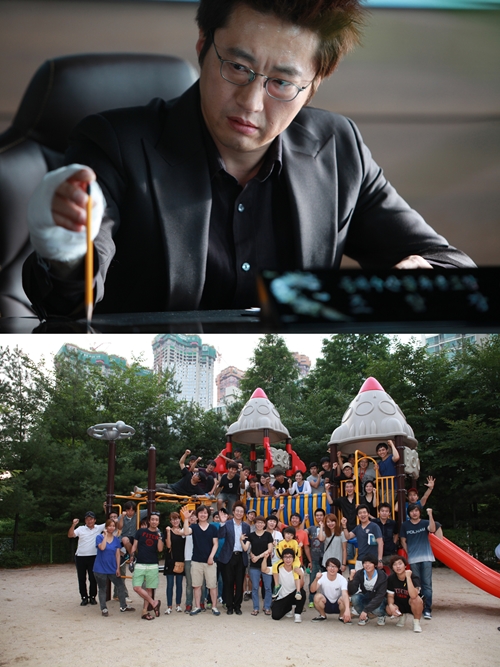 "Man on the Edge" by Park Shin-yang cranked up on the tenth.

"Man on the Edge" completed filming on this day after four months. The last scene, which was taken in a basement parking lot, was of the gangster Gwang-ho (Park Shin-yang) talking in secret with a mysterious woman who is a ghost. It is one of the episodes that occur to Gwang-ho who leads an extreme life.

Park Shin-yang put on a show of living life as a gangster and a shaman at the same time and revealed his comical side for the first time.

After 67 times of shooting for this movie since March, Park pulled off 90% of the movie and the crew presented him with handmade soap and a plant. Apparently he went around shaking the hand of every one on site and ended in pleasure. .

"Man on the Edge" is about a man's risky life from being a gangster one day to a shaman in another. The cast includes, Park Shin-yang, Jung Hye-young, Uhm Ji-won, Kim Jung-tae and more. This movie will be released at the end of the year.

""Man on the Edge" Park Shin-yang's gangster life VS Shaman life"
by HanCinema is licensed under a Creative Commons Attribution-Share Alike 3.0 Unported License.
Based on a work from this source