Many romantic comedies but... no viewer guarantee 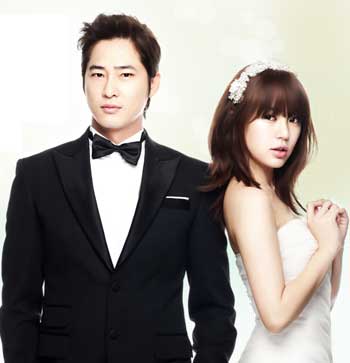 "Lie to Me" drops in value because of over flood.

Romantic comedy is 'it' now. However, none of them have a high viewer rating.

SBS "Lie to Me" with Yoon Eun-hye and KBS 2TV "Babyfaced Beauty" are only in their beginning 10%'s. MBC "The Greatest Love" with Gong Hyo-jin rated 18.1% (according to AGB Nielsen Media Research) in the first week of June but KBS 2TV is still struggling in the beginning 10%.

Romantic comedies usually show a normal woman meeting a rich man and becoming Cinderella. "Cat on the Roof" (MBC 2003), "Lovers in Paris" (SBS 2004), "Full House" (KBS 2004) until "My Name is Kim Sam-soon" (MBC 2005). Romantic comedies have had a guaranteed viewer rate. The fact that women could watch them comfortably and be emotional was a stand out.

"Many romantic comedies but... no viewer guarantee"
by HanCinema is licensed under a Creative Commons Attribution-Share Alike 3.0 Unported License.
Based on a work from this source