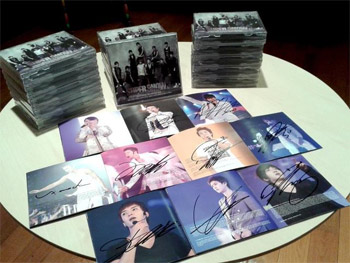 Throughout the month of March, the Korean Cultural Center hosted its monthly K-Pop Giveaway Contest with K-Pop megastars Super Junior. Super Junior is a 13-member all-around entertainment group. They have been active in film, TV, musicals, and radio. Their major songs like "Sorry Sorry" (2009) and "Bonamana" (2010) spent weeks perched atop the music charts in Korea and other Asian countries. Super Junior enjoys burgeoning followings in the United States, Europe, South American, and Central Asia. Along with SM Entertainment, home to Super Junior, the Korean Cultural Center was excited to bring an opportunity for fans to win one of fifteen autographed Super Junior albums.

More than 700 entries were received from fans from around the globe that shared their love for their favorite K-Pop stars by posting creative videos, pictures, stories, and poems. Some of the best entries included stories from fans that were lucky enough to see Super Junior live in concert, and also stories from dedicated fans that spend every moment of their spare time learning Korean and memorizing the lyrics to their favorite Super Junior songs. Some entries featured artwork handmade by the fans and also videos from fans that learned some of Super Junior's most popular choreography. Fifteen lucky winners were selected as winners of autographed Super Junior albums and ten more winners were selected as winners of a series of books about Korean popular culture. Congratulations to all of the winners!

The winners were super creative, and excited the Korean Cultural Center with the passion they included in their entries! Moriah Cheng showed that she was a truly dedicated and hard working fan by posting multiple posted almost every day of the month and talked about some of the wonderful things that the members of Super Junior have accomplished since their debut. Mark Villanueva showed that he loved the relationships that fans have formed due to their shared love of Super Junior and his love of the various personalities in the multi-member group.

The winners of March's K-Pop Giveaway have been chosen.

Thank you so much to all that participated in the giveaway! It was so great to see so many people participate!

Congratulations to our winners!