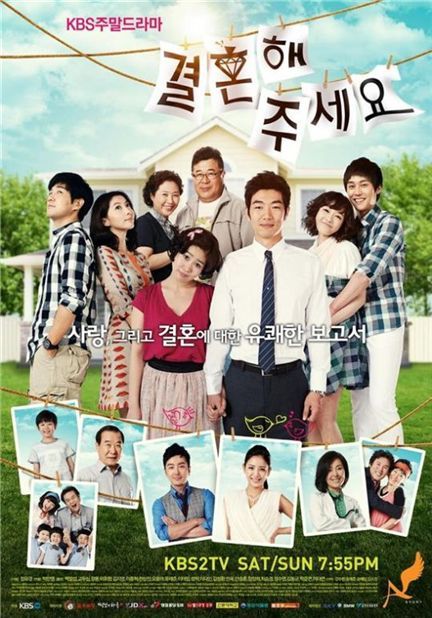 KBS drama "Marry Me, Please" ("All About Marriage") [KBS]

KBS weekend series "Marry Me, Please" ("All About Marriage") finished its run on top of the weekly TV charts during the third week of December, according to major research firms on Monday.

Data by Total National Media Research (TNmS) on Monday revealed that "Marry Me, Please" ("All About Marriage") scored an average viewership rating of 29.2 percent while recording a slightly higher rating of 31.6 percent on AGB Nielsen Media Research's poll.

Meanwhile, KBS' variety show "Happy Sunday" came in second place on TNmS' survey with an average rating of 26.6 percent but AGB reported that KBS' weekly drama "Smile, Dong-hae" was No. 2 with a mark of 28.8 percent.

Landing in third was SBS' romantic comedy "Secret Garden", starring Ha Ji-won and Hyun Bin, with a mean score of 25.5 percent on TNmS' chart while AGB's poll showed that KBS' entertainment program "Happy Sunday" was the third most-watched show with a rating of 27.3 percent. 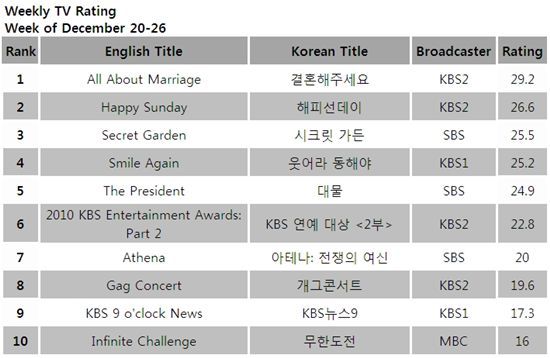 ""Marry Me, Please" finishes run on top of weekly TV charts "
by HanCinema is licensed under a Creative Commons Attribution-Share Alike 3.0 Unported License.
Based on a work from this source