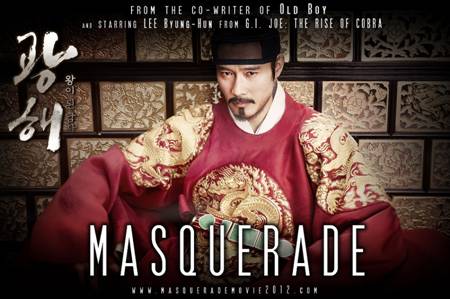 Since its South Korean release on September 13th and its North American release in select cities on September 21st, historical drama "Masquerade" has experienced sweeping success in both countries. In South Korea, "Masquerade" has been topping the weekend box office for six consecutive weeks, reaching 10 million in admissions and becoming the 7th movie in Korean film history to surpass the number. Following a Red Carpet Premiere at the Los Angeles County Museum of Art with Lee Byung-hun and a limited U.S. release, "Masquerade" is now expanding to six more cities, including the brand new Angelika Mosaic in Washington D.C. See added list of theaters and release dates below:

CJ Entertainment brings the historical drama "Masquerade" to North American theaters.  Set in the seventeenth century, "Masquerade" was written by the co-writer of "Old Boy" and stars Lee Byung-hun (G.I. Joe: The Rise of Cobra and "A Bittersweet Life") in one of this fall's most riveting tales.

"One must not record that which he wishes to hide".

The tyrant of the century, or the tragic monarch?

Gwang-hae was the fifteenth king of the Chosun dynasty.

Though the threat of assassination and conspiracy made him a tyrant,

Secret history indicates that out of the fifteen years of rule,

Gwanghae was a good and wise king for fifteen days.

He ensured the safety of the palace's most lowly servants

And lamented the fate of the kingdom's slaves and concubines.

Rather than protect his throne, he worried for the people's livelihood.

He was the King that the people of Chosun had always dreamt of.

Gwanghae left the following entry in his journal:

"One must not record that which he wishes to hide".

And 15 days from the Annals of the Chosun Dynasty disappeared forever.

A man not meant to be king.

Coming this fall is the hotly anticipated historical drama ""Masquerade"", starring Korea's world star Lee Byung-hun and written by "Old Boy" co-writer, Hwang Jo-yoon. The versatile actor LEE (G.I. Joe: The Rise of Cobra and A Bittersweet Life) plays the dual lead as both the tragic King Gwanghae and that of the commoner who shares a fatefully remarkable resemblance to the ruler, Ha-Seon. Deeply embroiled in palace intrigue which aims to assassinate the ruler, King Gwang-Hae orders his trusted councilor Heo Kyun to find him a body double. When the King collapses from a mysterious poison, Ha-seon must carry off the biggest "Masquerade" of his career to save the country from chaos while under imminent threat of death. Acclaimed character actor Ryu Seung-ryong ("Everything about my Wife", "Arrow, The Ultimate Weapon") and rising star Han Hyo-joo ("Always") appear in supporting roles as the councilor and the queen, respectively.

SBS's hit TV series "Deep-rooted Tree" became a sensation in 2011 through its solid retelling of the creation of the Korean alphabet (Hangul) and its creator, King Sejong. 2012's MBC TV series "The Sun and the Moon" was a fantasy costume drama set in the Chosun Dynasty and illustrated the story of a fictional king falling in love with a mystical shaman girl. Both series won the hearts of audiences through their combination of historical genre, excellent story-telling, and a romance that transcends time.

"Masquerade" is a film that uses the true premise of 15 days that are missing from the Annals of the Chosun Dynasty. It is the first film about the controversial figure of King Gwanghae, and one that is garnering attention for being one of the most anticipated historical dramas of the year. Humor and fear accompany the commoner Ha-seon as he undergoes the steps to become a true king, and as an untold side to the tragic King Gwanghae is unveiled.