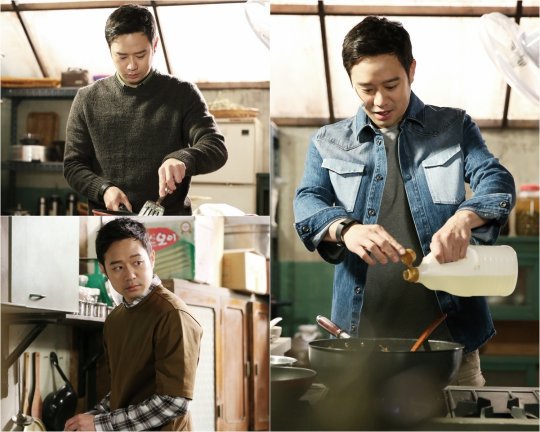 He takes on the role of Moo-myeong, a character who struggles to claim back what was taken from him and Chun Jung-myung has set out to learn how to cook.

Pictures of the actor show Moo-yeong cooking for children at an orphanage. He looks like he's having fun as he is concentrating on his cooking at the same time. He inherited the gift from his father who was a noodle expert.

Chun Jung-myung is a good cook in real life. He loves to follow recipes from cooking shows and even cooks for those around him.

"Master - God of Noodles" sources say, "Chun Jung-myung is such a good cook that he was able to handle the kitchenware easily without much difficulty".

Meanwhile, "Master - God of Noodles" is based on an original comic and the first episode can be seen on the 27th at 10PM.

""Master - God of Noodles" Chun Jung-myung's outstanding cooking skills"
by HanCinema is licensed under a Creative Commons Attribution-Share Alike 3.0 Unported License.
Based on a work from this source