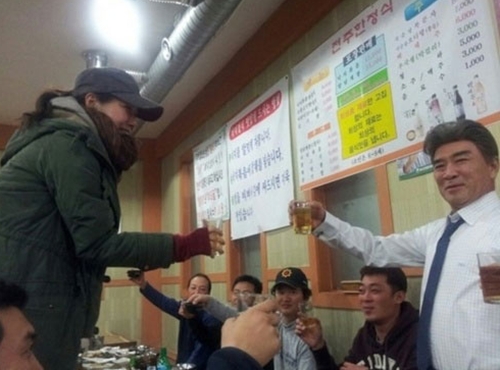 A picture of the "May Queen" teams dinner party was posted online on the 6th.

Lee Deok-hwa and Yang Mi-kyung are about to cheers each other in the picture. The two of them appear in the drama as a married but enemy couple.

The two are a normal couple in the drama until Geum-hee (Yang Mi-kyung) finds out that Do-hyeon'(Lee Deok-hwa) killed her former husband and even tried to kill her daughter Hae-joo (Han Ji-hye).

According to sources, the dinner party was so much fun thanks to Lee Deok-hwa who suggested to cheers first.

Meanwhile, MBC weekend drama "May Queen" is being aired every Saturday and Sunday at 9:50PM.

""May Queen" dinner party picture"
by HanCinema is licensed under a Creative Commons Attribution-Share Alike 3.0 Unported License.
Based on a work from this source