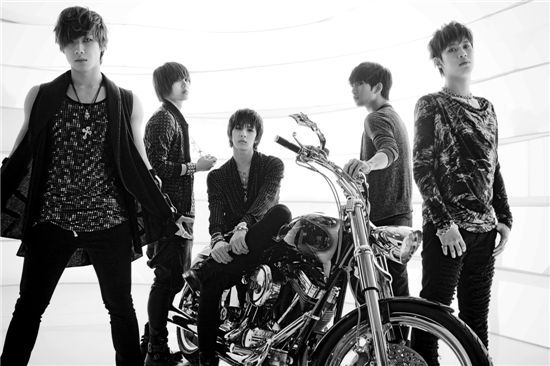 According to the group's agency J. Tune Entertainment on Friday, MBLAQ will take part in the Mnet Ultimate Live in Asia (MULA) Concert where they will perform not only as a group but stage solo performances as well.

Lee Joon, the rapper of the group, will dance to music "Last Carnival", displaying his skills as a former modern dance major when he attended the Korea National University of Arts (KNUA).

Yang Seungho, the leader of the group, will take a shot at dancing the moves of world-renowned choreographer Lyle Beniga who is known in Korea for teaching Big Bang member Taeyang.

Member Chun-dung will reenact a performance by singer and actor Rain while Mir and G.O will stage their rapping and band playing skills.

The group will leave for Singapore on Friday and return to Korea immediately after the show to focus on their next full-length album.

After being discovered and trained by Asia superstar Rain for two years, MBLAQ debuted in October 2009 with single album "Just BLAQ" which was followed by their second single "Y" in May this year.

The group's latest song "Bang Bang Bang", a song to the soundtrack of KBS drama "The Fugitive Plan B" and their earlier title track "Running & Running" of the same drama has also been doing well in the local OST chart.

"MBLAQ to hold first live concert in Singapore "
by HanCinema is licensed under a Creative Commons Attribution-Share Alike 3.0 Unported License.
Based on a work from this source