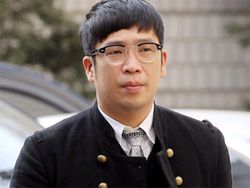 MC Mong attended his fourth trial on February 8th at the 519th Seoul Central District Court, over the prosecutions that he purposely removed his teeth to dodge his mandatory military draft. A witness -- surname Lee -- was present at the trial; he was a dentist responsible for extracting a tooth from Mong.

The witness gave his testimony, saying Mong sought him out on November 12th, 2006. Lee said that he had personally suggested that the k-pop star remove one of his teeth because it required endodontic treatment. Lee clarified that MC Mong was already exempt from his military duties at that point. On Mong's second visit, he had asked how he could receive a soldier's medical diagnosis. Also, there was another tooth Mong expressed was causing him pain, hence why that one was also ultimately extracted.

The dentist noted that 10 of Mong's teeth were missing at the time and so the thought did cross his mind whether any additional extractions would prevent Mong from fulfilling his military service. However, because the tooth was in such bad condition, he had no choice but to remove it.

Lee then proceeded to download a score guide for exemptions and pointed out that before that last extraction, Mong was already exempt from his duties. Thus, his decision to remove an additional tooth was for pain management and not to dodge his military service.