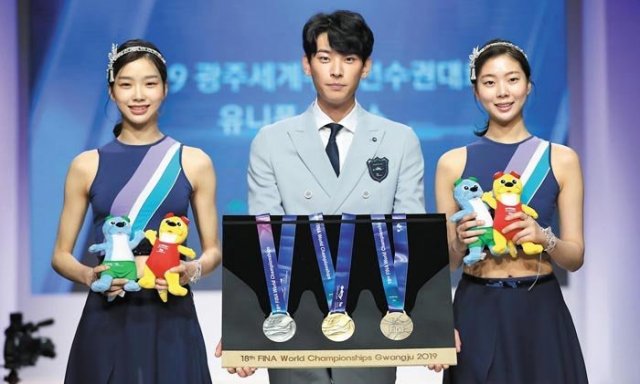 Models wearing the uniforms of this year's FINA World Championships unveil the medals for the event at a ceremony in Seoul on Wednesday.

The medals for the upcoming FINA World Championships in Korea were unveiled at a ceremony in Seoul on Wednesday.

The biennial aquatics event will be held in the southwestern city of Gwangju from July 12 to 28.

The front of the medals feature designs inspired by Mt. Mudeung and the Yeongsan River, two landmarks of Gwangju, with the event's slogan "Dive into Peace" engraved on them.

The uniforms for the FINA officials, referees and volunteers were also presented at the ceremony.

Star swimmer Park Tae-hwan attended the ceremony as a promotional ambassador for the event. But he said, "I will not take part in the world championships because I'm not in good enough form to compete in an international competition".