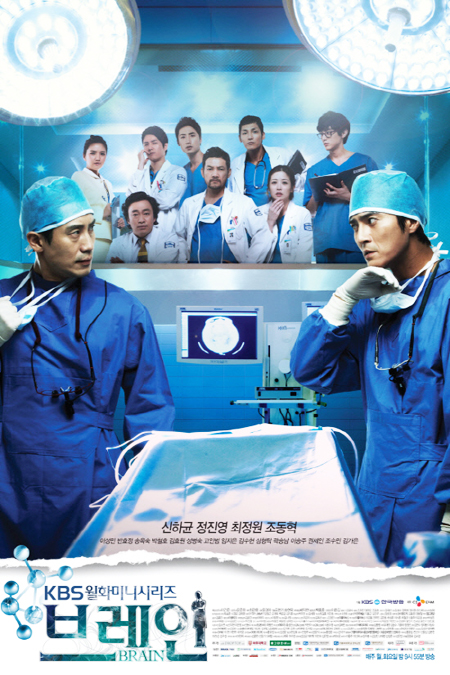 Medical dramas are returning to the small screen. The latest entry is KBS's "Brain", which will start Monday.

"Brain", set in a university hospital features four doctors and their mentor, rivalry and love.

Director Yoo Hyeon-gi teams up with script writer Yoon Kyeong-ah; formerly the duo worked together to make the popular KBS drama "Master of Study"".Ms. Yoon and I wanted to tell a story about the human mind; and in Western medicine's perspective, studying the human mind often means investigating the brain", said Yoo.

"I am not quite sure what (an ideal doctor) means yet. In my eyes, Kim is an idiosyncratic doctor - a really odd one", Jung said. Kim and Lee will eventually show a true mentor-mentee relationship that is often undermined in our cutthroat society.
Shin's character falls in love with Yoon Ji-hae, a third year resident played by actress Choi Jung-won. "Yoon, who is from an average background, becomes attracted to the sorrow and pain that made Lee so ambitious and greedy. It's a kind of sympathy that brings out the maternal instinct of a woman".

Actor Jo Dong-hyuk plays Seo Jun-seok, another second year fellow from a wealthy and powerful background. "Seo does not have any grand ambitions; he already has everything. "

Naturally, Lee attacks Seo because of his goals and insecurities.

Every actor expressed the challenge of using medical terms. Shin confessed he is responsible for many bloopers because he kept forgetting the terminology. Interestingly, though doctors in real life use English terms, the surgeons in "Brain" used Korean medical vocabulary. "In reality, doctors all use English terms, but the use of English makes it harder for the viewers to understand even though the terms that are already so difficult. I think this was director Yoo's considerate decision to accommodate our audience as much as possible", Jung explained.

Recently, KBS was accused of providing intolerable working conditions when actress Han Ye-seul fled the set of drama "Spy MyeongWol". To address this concern, the actors emphasized the preparedness of the production of "Brain" multiple times. "Director Yoo spent a lot of time getting ready for this show. The scripts for eight episodes have already been finalized and Yoon has finished writing up to the 14th episode.

Though neurosurgery is still a male-dominated field in Korea, women's participation in medicine has grown. More female students are admitted to medical schools than male students nowadays. Yet, Choi's character Ji-hae is promoted mainly as a clumsy and overly emotional female resident and the coveted prize of a love triangle - typical traits of a cliche female character. "I think it says a lot that my character Ji-hae is in a male-dominated universe. Yes, she makes a lot of mistakes but she tries her best to improve. You will see that if you watch the show", Choi elaborated.

Director Yoo emphasized that he tried to keep true to the genre of medical dramas.

"Brain" will be broadcast on Mondays and Tuesdays on KBS, with two episodes airing next Monday.

"Medical dramas making comeback to small screen"
by HanCinema is licensed under a Creative Commons Attribution-Share Alike 3.0 Unported License.
Based on a work from this source