"Memoir of a Murderer" hits 2 million 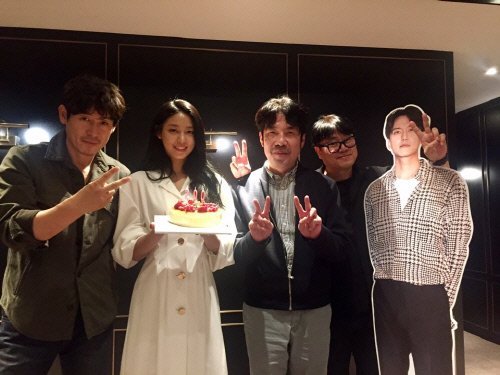 Show Box announced that Sol Kyung-gu's "Memoir of a Murderer" had broken two million audience views on the 17th by 4 PM KST. It has become one of Korea's best thrillers.

This record is important it's the first Korean thriller to break two million. Sol Kyung-gu, Seolhyun, Oh Dal-soo and director Won Shin-yun celebrated by taking a picture together. Kim Nam-gil wasn't there for work but his life-sized cardboard cutout was.

"Memoir of a Murderer" is based on a novel by Kim Yeong-ha about a retired serial killer who suffers from Alzheimer's disease and plans the biggest murder case of his lifetime in order to protect his daughter, while he also tries to cope with his disappearing memories due to the disease.

Sources say that the performances of the cast were outstanding and Seolhyun was a standout. Important details of the novel were portrayed in the movie and brought the theater to life.

At the special stage appearance of "Memoir of a Murderer" Sol Kyung-gu said, "Thank you for your precious time. I am so happy that many people responded to the movie like this. I'm sure many haven't seen it yet, but the movie goes on until Chuseok so please watch it with your friends".

""Memoir of a Murderer" hits 2 million "
by HanCinema is licensed under a Creative Commons Attribution-Share Alike 3.0 Unported License.
Based on a work from this source