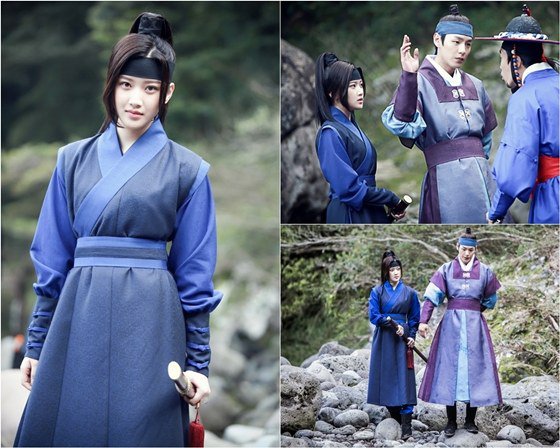 Actress Moon Ga-young is coming to the public as an elegant warrior in the new JTBC drama "Mirror of the Witch".

She takes on the role of Sol-gae, a warrior and friend to Poong-yeon (Kwak Si-yang).

In the pictures, Moon Ga-young looks strong and sturdy with her hair tied back. She's wearing a warrior's outfit but at the same time she looks elegant and her fair skin and features stand out.

Moon Ga-young seems to be following Kwak Si-yang silently in the pictures. She's standing behind him like a shadow and this reflects on how she might be feeling.

Sol-gae was raised amongst beggars and learned how not to starve. She has a strong ego which never lets her bow down in any situation even if she has to seal to survive. She doesn't open up to people but with Poong-yeon, she wants to be a woman. She hides these affections for Poong-yeon and stands behind him like a shadow.

"Mirror of the Witch" depicts a four-way romance between the unfortunate genius Heo Joon (Yoon Si-yoon), a Joseon witch named Yeon-hee (Kim Sae-ron), Poong-yeon who puts his life on the line for her and Sol-gae who stands by him.

Meanwhile, "Mirror of the Witch" is a fantasy historical about an unfortunate princess named Suri who is cursed to be a cold hearted witch and a passionate, young man named Heo Joon.