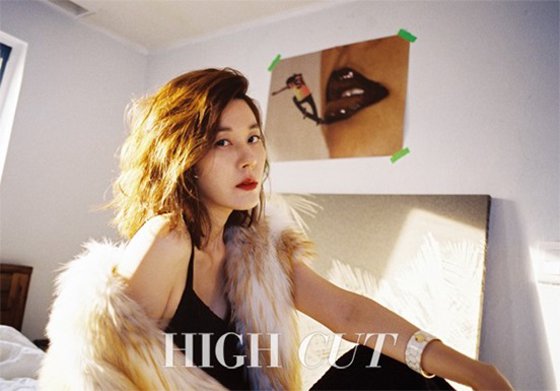 Kim Ha-neul is wearing a black slip dress and a fur jacket. She's looking like a femme fatale as she's wearing red lipstick and her hair is fuzzy.

In the following interview, Kim Ha-neul spoke about her character Hyo-joo who is overwhelmed with inferiority and jealousy. "What Hyo-joo feels is what anyone would feel as they are young".

"When I saw girls my age becoming Class President, I used to think, 'why is she so smart, so pretty and from such a nice family?' I was smiling on the outside, but inside I was jealous. I used that emotion for the movie".

Meanwhile, the pictures of Kim Ha-neul, Yoo In-young and Lee Won-geun can be seen in the 189th issue of High Cut.

""Misbehavior" Kim Ha-neul in a slip dress, femme fatale "
by HanCinema is licensed under a Creative Commons Attribution-Share Alike 3.0 Unported License.
Based on a work from this source