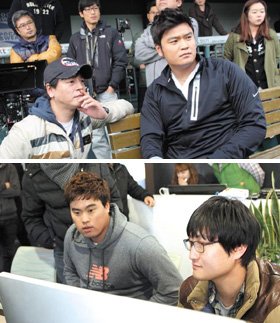 The two came to appear in the movie as they are acquainted with the director. The movie will hit local theaters in July.

"Mister Go 3D", based on the work of famous cartoonist Hur Young-man, tells the story of a gorilla with a special skillset who joins a professional baseball team in Korea and becomes a superstar.

Ryu, Choo and real-life players from the Doosan Bears in Korea's professional league appear as teammates who are amazed by the talented primate's batting skills.

"Ryu and Choo's acting abilities are on par with their excellent baseball skills, and they both seemed excited about their first appearance on the silver screen", said Showbox, the film's distributor.

"MLB's Choo, Ryu Appear in Korean Baseball Film"
by HanCinema is licensed under a Creative Commons Attribution-Share Alike 3.0 Unported License.
Based on a work from this source