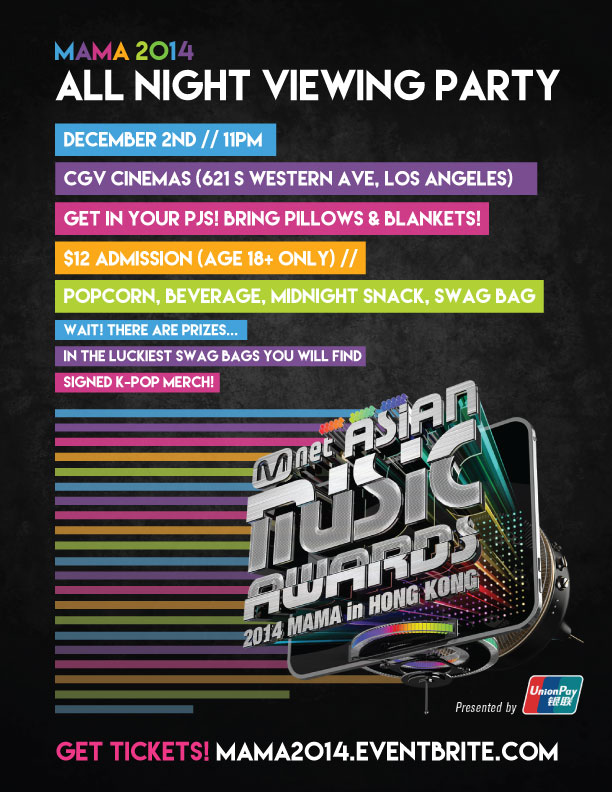 Mnet America, the first and leading national, 24/7 English-language television network in the U.S. for the hottest in Asian entertainment, has announced that they will be airing the 2014 Mnet Asian Music Awards (MAMA) LIVE from the AsiaWorld-Expo in Hong Kong on its cable network as well as via live stream on the mini-site for Mnet America's talk show "Danny from LA" (www.dannyfromla.tv) and the Mnet America YouTube channel (www.youtube.com/mnetamerica)

In addition, Mnet America will be hosting a special '2014 MAMA All Night Viewing Party' screening the entire award show at the CGV Cinemas Los Angeles. Doors open at 11:00 PM and will finish after the award show completes. Prizes will be given out and fans are encouraged to wear their Pajamas, and to bring pillows along with their blankets. Tickets are $12 and can be purchased through mama2014.eventbrite.com.

The Mnet Asian Music Awards is one of Asia's biggest music award shows celebrated by over 2.4 billion people from around the world and attracting not only the hottest names in Korean entertainment but giant names from the international community. Last year, world famous artists Stevie Wonder, Ylvis, Icona Pop, and Aaron Kwok joined to celebrate 2013 MAMA which was simultaneously broadcasted to many countries in Asia, Europe, North America, Africa, and Oceania. In the past, blockbuster performances have included Snoop Dogg, Dr. Dre, Adam Lambert and CL from 2NE1 on stage with the Black Eyed Peas.

"Mnet America Airing 2014 MAMA Exclusively in the U.S. on TV, Online and at CGV Cinemas Los Angeles"
by HanCinema is licensed under a Creative Commons Attribution-Share Alike 3.0 Unported License.
Based on a work from this source