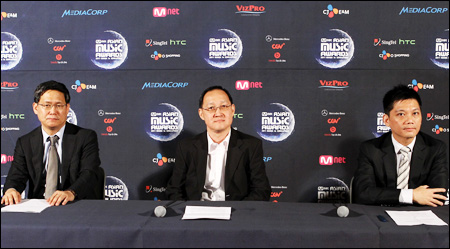 Mnet Asian Music Awards (MAMAs) 2011, one of the largest music awards in Korea, heads to Singapore this year.

Kim Sung-soo, chief executive officer of CJ E&M, said at a press conference held Tuesday that the MAMA 2011 aims to be an international music festival.

"K-pop is leading a new 'hallyu', or Korean wave, and more broadcasters are hosting overseas concerts after last year's MAMAs in Macau", Kim said. "We hope to communicate seamlessly with Asia through music and create a large single music market. We aim to raise the MAMAs to 'the Grammys of the East.'"

The awards began in 1999 under the name of Mnet Music Video Awards and changed the name to Mnet KM Music Festival. In 2010, it changed its name to Mnet Asian Music Award and transferred the venue to the Venetian Macau, aiming to become a music awards representing Asia.

Kim said Mnet chose Singapore to better promote Korean culture, especially K-pop. "Singapore is the place where East meets West and we thought it would be symbolic to hold the MAMAs in Singapore. We plan to expand it to other countries such as China, Japan, Malaysia and Indonesia in the years to come", he said. "CJ E&M wants to contribute to developing the music market in Asia as a whole". 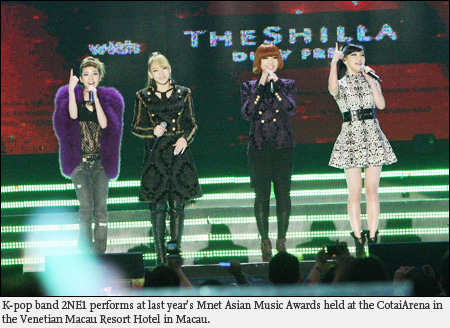 This year's MAMAs is co-hosted by Singapore broadcaster MediaCorp.

The Singaporean counterpart also expressed excitement in hosting the Asia-based music fest in their country.

"K-pop has become a worldwide phenomenon, enjoyed by fans all over the world", said Wee Way Kiat, executive vice president of MediaCorp. "We are honored to host the largest music award in Asia and believe this collaboration will bring more K-pop and Korean culture to Singapore. We seek a partnership with future fans and the industry".

"Singapore is the capital for the music and entertainment business in Asia, a vibrant city with various cultures", he said. "MAMA 2011 will provide more dynamicity to the entertainment landscape and this is only the beginning for other interesting collaborations with CJ E&M".

MAMA 2011 will be broadcasted in 19 countries, including live in Korea, Singapore, Japan, Hong Kong, Thailand and Malaysia.

Mnet director Shin Hyung-kwan emphasized that holding MAMA abroad is not a one-shot event but a part of the channel's global communication.

Though the awards are mainly given to Korean singers, special awards have been prepared for overseas artists.

"We are casting artists from China, Japan, Singapore, Taiwan and more and some of them might collaborate on stage with Korean singers", Shin said.

Fans can participate in an online vote at www.2011mama.com.

"Mnet Asian awards heads to Singapore"
by HanCinema is licensed under a Creative Commons Attribution-Share Alike 3.0 Unported License.
Based on a work from this source