Mnet's New Music Awards to Be Held Next Month 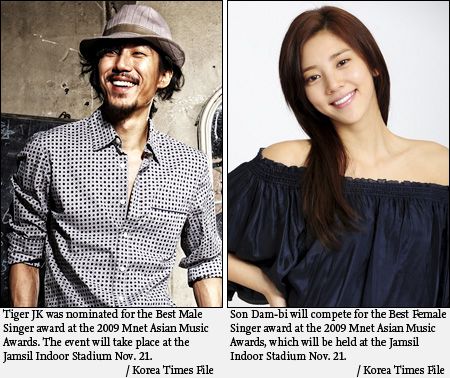 Mnet Media, one of Korea's most popular music networks, will scrap its 10-year-old music festival for a new one titled "2009 Mnet Asian Music Awards" (MAMA).

The former event "Mnet KM Music Festival" (MKMF) was organized by two music cable channels, Mnet and KM. It was considered one of the biggest music award events in Korea. However, Mnet surprised fans when they posted a large sign on its Web site early this month saying that they were not holding the MKMF this year.

Curiosity emerged, and the network finally announced that they were creating a new event that would attract not only Korea's most popular singers, but also those from around the world.

"Our final goal is to not only show the best of Korean music to the world, but also become Asia's representative award event and attract other famous artists to come as well", Mnet Media said.

The network is preparing subtle yet unique changes, from the style of the event to the judging system.

The biggest change will be the overall concept.

"In the past 10 years, the event was more of a concert where young fans cheered on the performers and enjoyed the show. But we are looking into upgrading the event a bit, perhaps with a certain dress code applied even to the audience. We have not decided on what type of attitude and message we are aiming for specifically", an official from Mnet Media told The Korea Times.

MAMA, like its predecessor, will be aired live in Korea, China and Japan this year as well. Thanks to other networks like Channel [V] International, K-pop fans in Hong Kong, Thailand and Malaysia will also get to watch the event live.

Mnet Media has also enabled foreign fans to vote for their favorite singers and groups through a separate Web site. Those who have overseas IPs will only have the chance to vote through this particular Web page.

Talented artists will compete in 29 categories divided into five different sections, including singer, genre, music video, grand prizes and others.

Newcomers Beast, MBLAQ and Taegoon will compete for the Best Male Newcomer Award among others, while 2NE1 and After School will compete with other groups for the female category.

The nominees for the Best Male Singer are Drunken Tiger, Rain and G-Dragon, among others, while the Best Female Singer category includes Bada, Baek Ji-young and Son Dam-bi.

The nominees include those who released their albums from Oct. 15, 2008 to Oct. 22, 2009.
Trot, a unique Korean pop genre, was added to the genre category Rock, Hip-hop, Ballad/R&B, Dance and House & Electronic.

Expectations are high, largely because the event is being organized by one of the most influential and popular entertainment companies in Korea. Ten years of experience may have given Mnet Media the time to establish a bigger and more influential show, but with less than a month to prepare, there seems much to be done.

The English Web site for the event is still under construction and the network has not confirmed any specific performers or even the hosts that will appear at the first MAMA.

"Most of the performers are revealed through several announcements probably less than two months prior to the actual event, considering rehearsals and promotion. Of course, there are last minute surprises that are not announced to the public, but these are the imperative ones", a PR official from a fellow music network told The Korea Times. She added that there's a certain timing and strategy that goes into setting up the schedule and informing fans and viewers about the event.

MAMA will be held at Jamsil Indoor Stadium on Nov. 21. The six-hour event will be aired live on Mnet. For local fans, visit www.mnet.com. The Web site for overseas fans will open this week through the Korean Web site.

"Mnet's New Music Awards to Be Held Next Month "
by HanCinema is licensed under a Creative Commons Attribution-Share Alike 3.0 Unported License.
Based on a work from this source