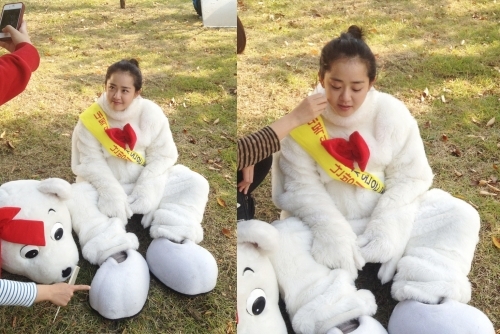 The first shoot started on the 19th and a picture of Moon Geun-young as Han Se-kyeong was posted.

In the picture, Moon isn't wearing any particular make up and has her hair tied to the back. It might seem tiring to be outside in a doll costume all day but apparently the cool weather helped out.

When Moon Geun-young took off the doll mask, crowds of pople gathered aroudnt eh set to get a glimpse of her.

Meanwhile, "Cheongdam-dong Alice" is going to be aired after "Five Fingers".

"Moon Geun-young films "Cheongdam-dong Alice" in a doll costume"
by HanCinema is licensed under a Creative Commons Attribution-Share Alike 3.0 Unported License.
Based on a work from this source