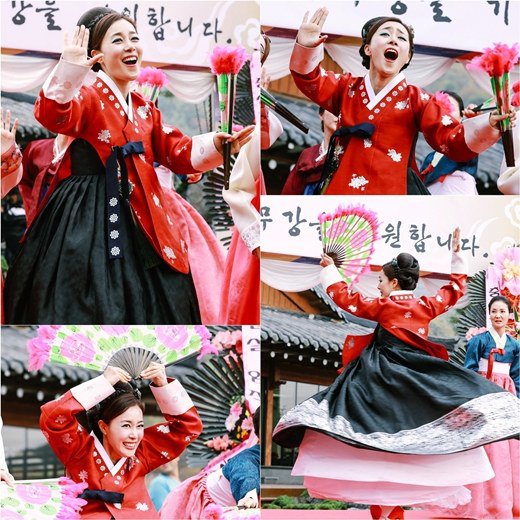 Actress Moon Jung-hee broke out into a dance.

Moon Jung-hee does the fan dance at Baek Man-bo's (Kim Eung-soo) seventieth birthday party. She give it her all for the bond of trust between her husband Yoon Tae-soo (Jung Joon-ho) and chairman Baek Man-bo.

Her dance for choreographed by a professional and with a little comedy, she was able to make it hilarious and entertaining. She prepared part of her costume herself and engaged herself into the fan dance.

Her dance made everyone on set laugh and weak at the knees. It was a time of new discovery about the actress Moon Jung-hee.

Meanwhile, "Sweet, Savage Family" is a human comedy about a gang boss who is at the end of the food chain at home, portraying the struggles of an ordinary Korean father.

Meanwhile, the drama starts in November after "She Was Pretty".

"Moon Jung-hee from "Sweet, Savage Family", comical fan dance"
by HanCinema is licensed under a Creative Commons Attribution-Share Alike 3.0 Unported License.
Based on a work from this source