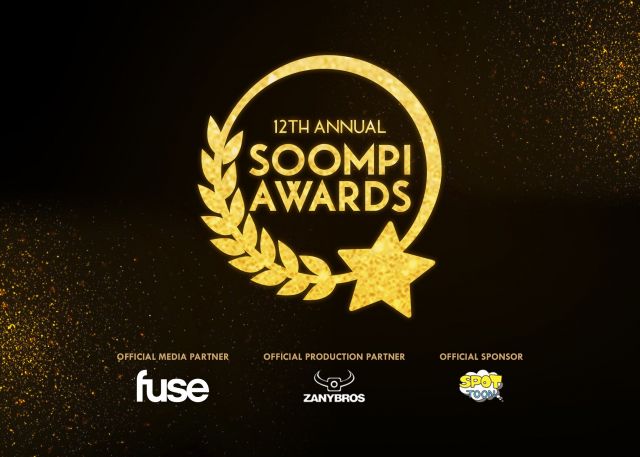 Soompi, the leading source for Korean pop culture news and fandom and a division of Viki, Inc., today announced the nominations for the 12th Annual Soompi Awards. Until January 16, fans will be able to vote in 30 K-Drama and K-Pop categories with winners to be announced in February. Last year, the Soompi Awards generated an incredible 40 million votes on Soompi and on social media platforms like Twitter and LINE, underscoring the massive global fandom around Korean entertainment.

Fuse, the American music and entertainment network, is the exclusive media partner for the awards. Global powerhouse K-pop group Monsta X will be this year's MC for the K-Drama categories and Korean television personality Jota will be the MC for the K-Pop categories. Videos announcing the categories and the winners will be produced in collaboration with ZANYBROS, the leading video production house in Korea.

"Moonlight Drawn by Clouds" and "Descendants of the Sun" lead this year in the K-Drama category with 11 and 10 nominations, respectively. Girl group TWICE leads the K-Pop category with 8 nominations. Nominees are calculated based on Soompi's weekly music chart and an expert panel comprised of Soompi staff. Other categories include the sponsored "SPOTTOON Best Couple" in K-Drama, and the "Fuse Music Video of the Year" in K-Pop. The full list of nominations can be found below and online at www.soompi.com/awards.
"Every year, we're amazed by the passion and support of the global fans of Korean entertainment", said Susan Kang, founder of Soompi and head of Community at Viki, Inc. "This year, our goal is to blow previous online voting numbers out of the water. With our incredible partnerships in place, I'm confident we can show the world just how popular K-Pop and Korean TV is becoming around the globe".

Fans will be able to vote for their favorites on Soompi as well as through Soompi's official LINE account. Winners will be determined by votes from the web and from the Soompi Music Chart. The popular "Best Fandom" category returns, with fans being able to vote for their favorite K-Pop groups on Twitter using the dedicated hashtag #Team(K-Pop group name) on Dec. 27 and Jan. 5. Last year, Soompi Awards related hashtags trended worldwide on Twitter for over eight consecutive hours, with #TeamGOT7 coming out on top.

Since 2005, the Soompi Awards has been the platform for international fans to celebrate and honor the best in Korean entertainment. Last year's winners include Kim Soo-hyun, BIGBANG, and more.

Voting can be found at www.soompi.com/awards.