More Deaths in Daegu Amid Shortage of Hospital Beds 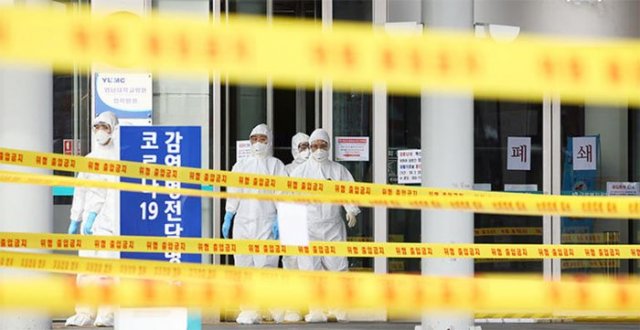 A hospital in Daegu is blocked to visitors on Sunday. /Yonhap

More coronavirus patients in Daegu are dying at home as they wait for hospital beds to become available amid a spike of infections there.

Two more patients died in their own homes in the southwestern city on Sunday, bringing such cases to four. One 86-year-old woman who tested positive on Feb. 28 and suffered from diabetes and hypertension could not be hospitalized due to a shortage of beds and died Sunday. Another 80-year-old woman died in her home while awaiting test results and was found infected afterwards.

According to Daegu city officials, 1,661 coronavirus patients have been quarantined at home. Out of 1,399 new confirmed infections in Korea over the weekend, 1,126 were in Daegu.

The government on Sunday belatedly decided to change the way it processes incoming patients. The Korea Centers for Disease Control and Prevention promised to evaluate the severity of infections and send acute cases to hospital while quarantining mild cases at other facilities.

Oh Myung-don at KCDC said, "We must now come up with a system to save the lives of acute cases. We need to allot patients to specific facilities by severity, boost the number of treatment hospitals and dispatch more medical professionals".

Meanwhile, the number of cases in Korea reached 4,212 on Monday morning, making it the country with the highest number of infections compared to the total population, followed by China.

The surge is partly due to the Korean medical system's effectiveness in identifying infected people. A total of 100,000 people have been tested here so far, far surpassing Japan and the U.S.

At least on paper, the per-capita rate of test in Korea is 60 times higher than Japan and 700 times higher than the U.S. Japan is being accused of trying to hide the number of infections by being slow to test them, while the U.S. government is focused on the upcoming presidential election.

A new test kit here invented by a Korea company makes it possible to detect a new infection in just six hours while the process used to take a whole day. It costs no more than W160,000 and the government reimburses patients (US$1=W1,216). The same test costs W4 million in the U.S., which precludes most people with symptoms from getting tested because they have no medical insurance.

"More Deaths in Daegu Amid Shortage of Hospital Beds"
by HanCinema is licensed under a Creative Commons Attribution-Share Alike 3.0 Unported License.
Based on a work from this source