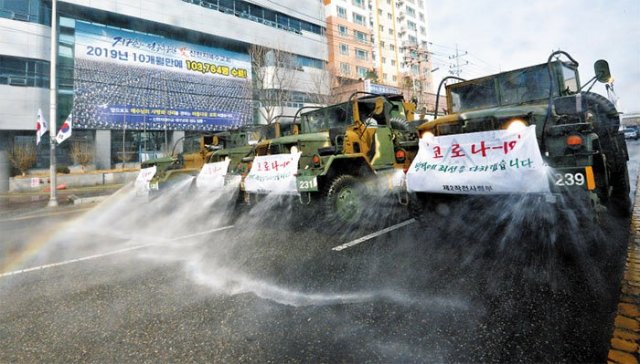 Military vehicles spray disinfectant on a street near a Shincheonji church in Daegu on Sunday. /Newsis

Followers of the secretive sect that has become a hotbed of coronavirus infections in southeastern Korea did visit China's Wuhan in January, the Korea Centers for Disease Control and Prevention said Sunday.

Wuhan is thought to be the source of coronavirus that spread across the globe. The Justice Ministry on Saturday said 42 people of the Shincheonji sect visited Wuhan from July last year to February this year, according to an exhaustive search of the travel records of 244,743 followers.

Kwon  Joon-wook, deputy head of the KCDC, said, "We're seeing some instances [of Shincheonji sect] followers visiting China, including Wuhan, in January. We're looking very closely into the route of infection that led to the widespread outbreak".

The Korean government banned visitors from Wuhan on Feb. 4, and the first infection in Daegu on Feb. 18 was a Shincheonji follower. Since then the virus has spread like wildfire among sect followers in Daegu and South Gyeongsang Province.

Shincheonji continues to deny that followers visited Wuhan, where the sect had a branch. "As we revealed already, none of the 350 followers of our church in Wuhan, China came to Korea since December". It added, "We would like the government to reveal the accurate travel dates of the 42".

As of 2 p.m. Sunday, 2,113 Shincheonji followers and their families or friends had tested positive, accounting for 59.9 percent of confirmed cases in Korea. Among followers in Daegu, 73.1 percent infected, probably through a follower who was Korea's 31st confirmed case and worshipped at one of its churches.

They also account for more than half of the infections in Gwangju (77.8 percent) and Ulsan (52.9 percent), and virtually no region is free from the risk of contracting the virus from Shincheonji followers as they travel across the country to proselytize.

Cooperation by the sect in revealing the exact size of its membership and their whereabouts has become a crucial element in preventing a further spread of the virus. But health officials are unable to contact around 4,000 followers.

After suspicions mounted that the sect is trying to stonewall the investigation, its leader, Lee  Man-hee (89), who had gone into hiding, on Saturday volunteered to be tested. The sect said Monday he tested negative but it did not reveal where and how he was tested. He is reportedly somewhere in Gyeonggi Province.

He promised to make a public announcement this afternoon.

"Most New Coronavirus Infections Among Sect Followers"
by HanCinema is licensed under a Creative Commons Attribution-Share Alike 3.0 Unported License.
Based on a work from this source