Mother honored by film critics association in Boston and Toronto 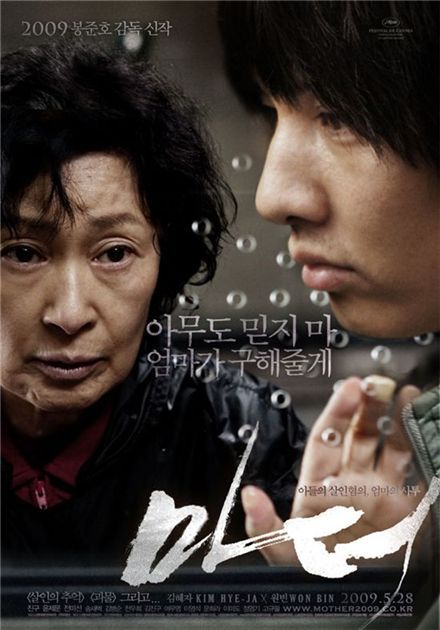 Korean drama "Mother - 2009", helmed by famed director Bong Joon-ho, was honored by the film critics association in Boston and Toronto after competing against some of the biggest pictures in 2010.

"Mother - 2009", starring Korean actors Kim Hye-ja and Won Bin, won the title of best foreign-language film and was the runner-up in the same category, according to the official Boston Society Film Critics (BSFC) and Toronto Film Critics (TFC) website, respectively.

Kim had also selected the best actress of the year by the Los Angeles Film Critics Association (LAFCA) as well as becoming the runner-up for best foreign-language film.

The Boston Society of Film Critics was formed in 1981 and its goal is to give a critical perspective on films on a national and international level through movie critics in Boston, Massachusetts and United States. Their awards ceremony will be held on next year on January 30 at the Brattle Theater in Boston.

First established in 1997, the Toronto Film Critics Association is an official organization of Toronto-based broadcasters and journalists who critique films and provide commentaries on them. They present awards to the best in the year's film industry and have juried in major festivals including Cannes, Berlin and Venice.

"Mother - 2009", which made its premiere at the Cannes Film Festival last spring, is about a mother's fight to prove that her mentally challenged son did not commit a murder which he is wrongfully accused of.

"Mother honored by film critics association in Boston and Toronto"
by HanCinema is licensed under a Creative Commons Attribution-Share Alike 3.0 Unported License.
Based on a work from this source